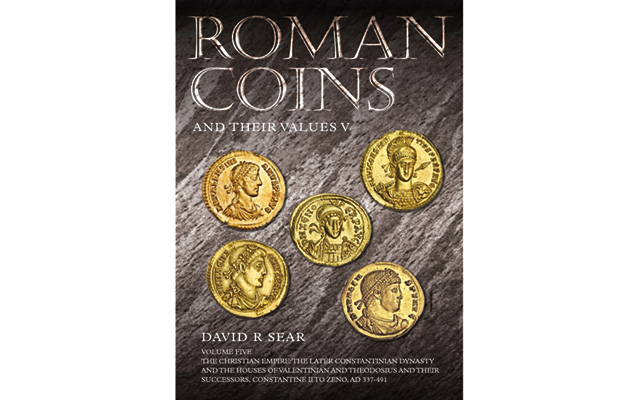 The fifth volume of David Sear’s Roman Coins and Their Values series is now available for pre-order.

The fifth volume from David R. Sear’s Roman Coins and Their Values series is now available for pre-order with delivery expected beginning in early December.

Roman Coins and their Values, Volume V; The Christian Empire: The Later Constantinian Dynasty and the Houses of Valentinian and Theodosius and their Successors, Constantine II to Zeno, AD 337– 491, continues the popular research and valuing series by Sear, a noted expert.

This fifth volume contains a comprehensive listing of the Roman coinage of the period A.D. 337 to 491 together with background information on the history of each reign and the principal characteristic of its coinage. The catalog is organized primarily by ruler with the issues then subdivided by denomination and by reverse legend and type.

The book contains clear black and white photographs and up-to-date values for Very Fine and Extremely Fine coins, in both United Kingdom pounds and U.S. dollars.

U.S. dealer Frank Robinson is offering the book to Coin World readers for $80 postpaid (in the United States), or $82.35 if paying by PayPal.