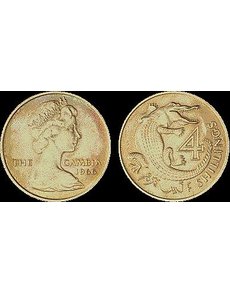 The African slender-snouted crocodile on this 1966 Gambian 4-shilling coin sometimes preys on small mammals, including children. 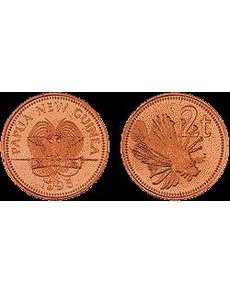 Like the cassowary, the lionfish is one of the native animals that has appeared on the coins of Papua New Guinea. It is one beautiful fish, but don’t touch. 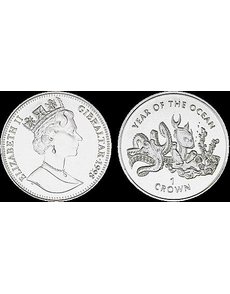 Coral reefs are vital to the health of our oceans and beaches, and contain a number of fierce animals, including sharks. This 1998 Gibraltar 1-crown coin celebrates the diversity of life found in reefs. 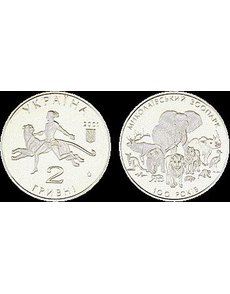 This Ukraine 2-hryvnia coin was minted for the 100th anniversary of the Nikolaev Zoo. One of 12 creatures featured on the coins, the cassowary, arrow, is the world’s most dangerous bird. 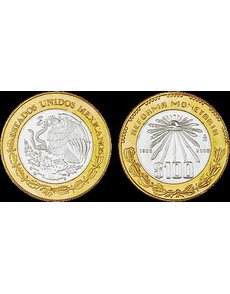 The golden eagle battling the rattlesnake is symbolic of Mexico’s determination to fight the enemies of freedom, but the rattlesnake warns first and only bites if provoked. 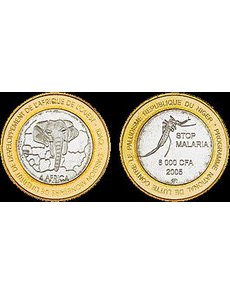 No other creature has killed more humans than the mosquito. This Niger coin seeks to help in the fight against malaria. 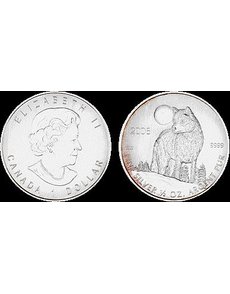 Statistically, the “big bad wolf” is not as fierce as folk tales suggest. Canada’s 2006 Timber Wolf half-ounce silver bullion coin is popular for its subject matter and silver textures. 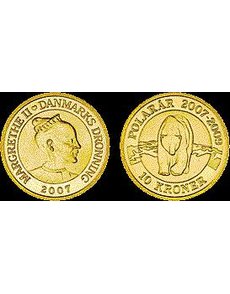 Danish money is used in Greenland, hence the design of this 2007 Danish 10-krone coin. The polar bear has no natural enemies and will eat whatever it can catch, including people.

After people, nonhuman animals are the most common subjects featured on world coins and the most popular major theme among topical coin collectors.

Within the animal category, it’s tough to beat fierce creatures (no pun intended). Scary beasts are especially collectible as a coinage theme because they tend to be as fascinating as they are frightening.

Some animals that are perceived as fierce are not all that dangerous, but others are more deadly than we realize. The wolf is an excellent example of the former. Its family has suffered lots of bad press in folklore, from werewolves to Red Riding Hood. However, documented nonrabid attacks on people are rare. Some experts calculate the worldwide fatality rate at two deaths per year on average.

Canada loves wolves and has issued several wolf coins since the centennial wolf 50-cent coin of 1967, including two types issued in 2012. The 2006 Timber Wolf half-ounce silver bullion dollar was an instant classic with its intriguing silver textures. It sells at prices far above the value of the precious metal today, at about $40.

For many people in the Americas, few sounds are more chilling than that of a rattlesnake. Many Mexican coins contain the national crest portraying a golden eagle battling a rattlesnake. The serpent is the bad guy representing the enemies of liberty. And yet, this snake bites in defense of itself if the rattle is ignored and then will inject venom only 80 percent of the time. Fortunately, today’s antivenom medications are highly effective, making rattlesnakes less dangerous than ever.

The polar bear is an example of a fierce creature that actually deserves its reputation. These large predators are unpredictable and dangerous because they will prey on whatever they can catch. Polar bear coins have been issued by Canada, Russia and Greenland. The latter, an autonomous nation within the kingdom of Denmark, featured polar bears on its coinage until 1944. Danish money is now used in Greenland. In 2007, Denmark issued three different coins to honor Greenland’s favorite bear, including 10-, 100- and 1,000-krone pieces.

The general rule about alligators and crocodiles is this: The bigger they grow, the bigger the prey they can eat. In 1966, Gambia issued a 4-shilling coin with the entire body of an African slender-snouted crocodile curled around its diameter. The beast poses a threat to small mammals, including children.

The world’s most dangerous bird is the cassowary, a colorful flightless native of Papua New Guinea and Australia and third in size after the ostrich and emu. Territorial and aggressive when approached, the bird has sharp talons used to kick and slash — the modern equivalent of the velociraptor (which, like the cassowary, was feathered). Cassowaries are popular sights at zoos. The 2001 Ukraine 2-hryvnia coin minted to celebrate the centennial of the Nikolaev Zoo features 12 animals, including a cassowary.

Along with this fierce bird, the lionfish is one of the native animals that have appeared on the circulation coinage of Papua New Guinea since 1975. The lionfish will be the only animal to ever grace the 2-toea coin, because the denomination was withdrawn in 2006. Stings from the spines of the lionfish cause severe pain, swelling, shortness of breath and in some cases, death. The good news is that the lionfish won’t bother snorkelers unless the swimmers bother them first.

Gibraltar’s 1998 1-crown coin commemorates the Year of the Ocean and features some of the fierce creatures found in coral reefs. Even deadlier than sharks, stonefish, cone shells and sea snakes is the highly venomous blue-ringed octopus. It is tiny, 5 to 8 inches long, and has to feel threatened by a human before it will attack. But once bitten, a victim has little hope of survival unless treatment for cardiac arrest is very near.

The fiercest creature of them all kills at least 2 million people every year. Humans can smash this monster with just a swipe of the hand, but if the mosquito has already bitten, it may be too late. The diseases spread by this insect have been the scourge of humanity for millennia and include malaria, encephalitis, West Nile virus, dengue fever and yellow fever, among others.

A 6,000-CFA-franc coin issued by Niger in 2005 features a mosquito design. It brings attention to this deadliest of all creatures and the need to find a way to stop malaria once and for all. ¦