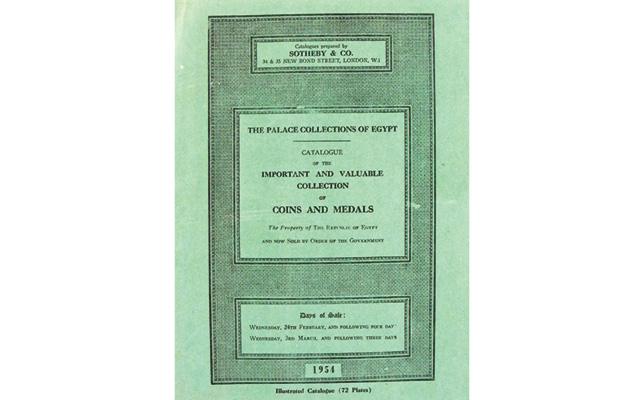 A 1954 catalog from Sotheby’s auction of the “Palace Collection” (formed by Egypt’s King Farouk) is notable not for its research scholarship but the collection it represents.

Auction catalogs can serve as a wellspring of scholarship, especially when thorough collections are presented for sale with careful, even lifelong, research.

There are exceptions, like the 1954 catalog for Sotheby’s auction of Egyptian King Farouk’s collection. A Near Fine example of the catalog is offered in Kolbe & Fanning Numismatic Booksellers’ Jan. 10 auction in New York City.

Though not among the expensive highlights, the book is important for the collection that it represents.

According to David Fanning, Fred Baldwin cataloged the Farouk sale and had to do so in very poor circumstances. “He was rushed, under armed watch at all times, and had little access to any references in Cairo. The resulting descriptions were intended largely for those personally in attendance, who could see the coins for themselves,” said Fanning.