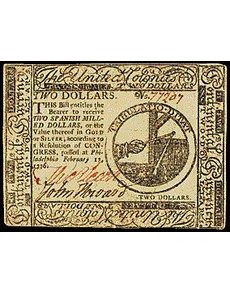 An image of threshing wheat may be foreign to modern Americans, but its appearance on a 1776 Continental Currency $2 note made sense to the more agriculturally-aware citizens of that era.

Farmers markets and roadside stands start popping up all over the countryside this time of year, injecting agriculture into the collective consciousness. Colonial Americans, from the inner city to the furthest frontier, were pretty much in touch with harvests of the country’s natural wealth.

This awareness of agriculture makes itself known on early American coins and paper money, too.

In Connecticut, grape vines make an appearance on the reverse of their 1785 to 1788 copper coins, replacing the Union Jack of Great Britain on the shield beneath the seated figure. The grape vines symbolized the fact that the initial settlers of Connecticut were transplanted from Massachusetts, just as a vine cutting can be planted and flourish. Such symbolism is probably lost on Connecticuters today.

In the 1730s, Dr. Samuel Higley used three hammers on his Higley coppers, preferring to draw attention to the colony’s iron deposits rather than its agricultural wealth. Higley, of course, controlled one of the larger mines in the state.

Vermont Landscape coppers of 1785 and 1786 are perhaps the most obvious agriculturally inspired early American coins, showing a plow in a field surrounded by Vermont’s Green Mountains. On Vermont’s 1786 and 1787 Mailed Bust Right coppers, well struck examples will show three wheat sheaves on the reverse shield.

New Jersey, even today called the Garden State, depicted a horsehead and plow on its Confederation-era coppers, a clear reference to the state’s agricultural prowess. The New Jersey coppers’ design is based on the state shield of 1777, designed by Pierre Eugene du Simitiere, one of America’s first notable coin collectors and the subject of one of the best numismatic biographies of all time, The Eagle That Is Forgotten, by Coin World columnist Joel Orosz.

Paper money shows everything from the “sacred cod” of Massachusetts (on notes from 1776 and 1778, engraved by Paul Revere) to a large bundle of wheat on the back of 1776 and 1777 Delaware notes. Wheat also appears on Continental Currency, comparing the threshing of wheat to the growing pains of a new nation, with a Latin inscription translated as “it is enriched by affliction.” Cornucopias are also appropriately plentiful on currency of the era.

Voltaire’s 1759 classic “Candide” ends with the suggestion to “cultivate your garden,” an Enlightenment-era sentiment of self-improvement. Modern collectors can cultivate a whole garden of flora and fauna on coins and paper money, and may find their collection improved in the process.