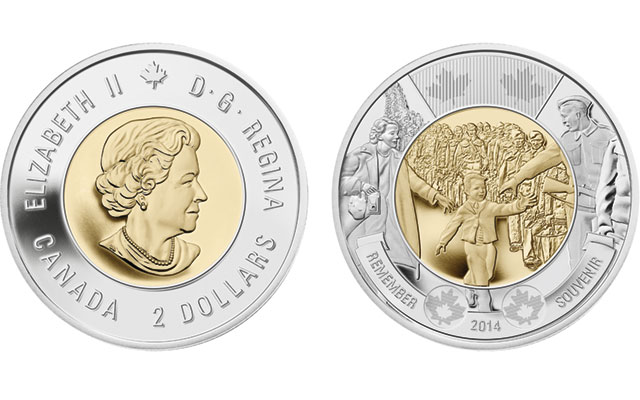 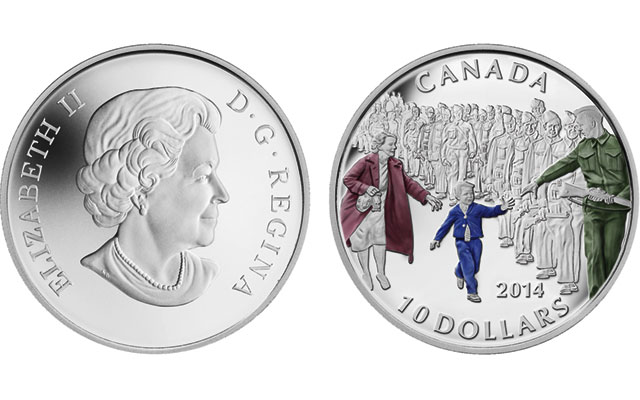 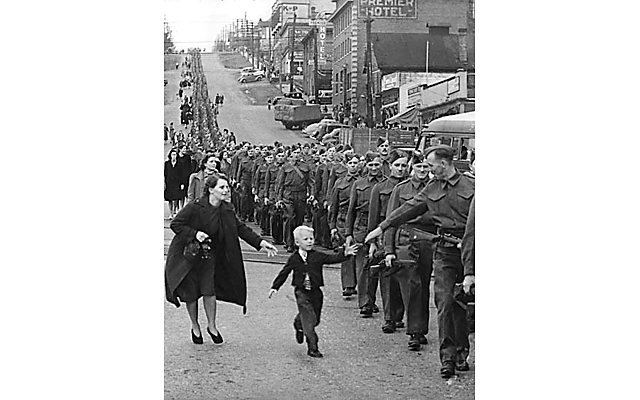 Photographer Claude Detloff captured this scene on Oct. 1, 1940, as soldiers prepared to leave to train for World War II. The image, courtesy of the City of Vancouver Archives, soon was published around the world and used to generate support for the war.

Image courtesy of the City of Vancouver Archives.

One of the most famous and popular of images from Canada’s World War II experience is now on a circulating $2 coin and two collector coins.

Titled “Wait for me, Daddy,” the photo captures a poignant moment of a soldier from British Columbia about to depart for war.

The Royal Canadian Mint unveiled the 2014 circulating coin on Oct. 4 in New Westminster, British Columbia, not far from where the scene was photographed on Oct. 1, 1940. The coin was unveiled as part of a community celebration of the photograph come to life in sculpture in the suburban Vancouver city.

The reverse of the coin focuses on part of the scene as captured by photographer Claude P. Dettloff (ofThe Province newspaper). The image shows then 5-year-old Warren “Whitey” Bernard running away from the grasp of his mother, Bernice, to his father, Pvt. Jack Bernard, who was in a formation of other soldiers about to board a train to an unknown destination as Canada continued mobilizing troops for the war effort.

Detloff was positioned to photograph the British Columbia Regiment (Duke of Connaught’s Own Rifles) marching down the hill on Eighth Street at the Columbia Avenue intersection in New Westminster, British Columbia, when he saw the boy break away. The image soon became used for war bond drives and was reprinted around the world.

The $2 coin is ringed bimetallic, and the boy, young “Whitey” Bernard, appears in the center, with his mother at left and his father at right.

The obverse of all three coins in this program carries the familiar Susanna Blunt effigy of Queen Elizabeth II.

The ringed bimetallic coin has a nickel ring and a center composed of copper, aluminum and nickel. The $2 coin measures 28.03 millimeters in diameter. Current coins of the same composition and denomination weigh 6.92 grams.

In total 5 million of the $2 coins have been struck for circulation through normal coin circulation channels, the RCM’s boutiques in Winnipeg, Vancouver and Ottawa, and through the RCM’s website.

Limited quantities of five-coin packs are available to Canadian residents (three packs per household) through an online coin exchange at a dedicated page at the RCM's website.

In addition, the RCM issued two new silver coins sharing a larger scene of the event. A Proof .9999 fine silver $3 coin weighs 7.96 grams, measures 27 millimeters in diameter and has a mintage limit of 15,000 pieces. It retails for $44.95 Canadian.

The $10 coin shows parts of the scene selectively colored, with the blond young boy in blue reaching for his father, in green, while his mother, wearing a maroon coat, stretches to catch up with the boy.

The coins are available for purchase only inside Canada. Interested collectors will have to search the secondary market.