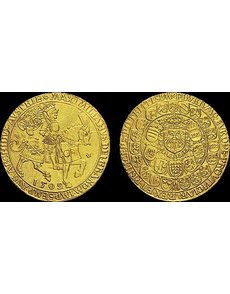 A unique 1509-dated gold schauguldiner was struck in 1517 by Holy Roman Emperor Maximilian I in Antwerp using dies for previous coinage. 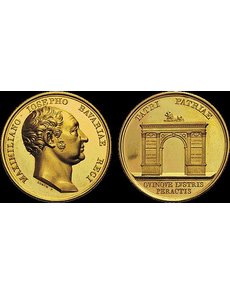 An undated, circa 1824, gold 18-ducat medallion celebrates the 25th anniversary of the coronation of Maximilian I Joseph.

Previous
Next
A collection of several hundred gold coins taken from Germany by refugees fleeing the Holocaust is being sold in an Oct. 26 auction.
The sale of the Charles F. Wasserman Collection of rare gold coins is being conducted by Fritz-Rudolf Künker in association with Hess-Divo in Zürich.
The coins were secretly removed from the country by some undisclosed means in 1938 by a Jewish family fleeing the imminent Holocaust, at a time when laws forbade owners to emigrate with such wealth.
The collection had been built by Dr. Felix Wassermann, a physician living in Munich who foresaw turmoil under Nazi rule and desired to protect his wealth by acquiring gold coins. The motive for the collection “was far less numismatic than it was wealth-protective,” according to Arthur L. Friedberg, who cataloged the collection. “Instead of common gold coins, he amassed at what was a relatively modest cost relative to their value today, some coins and medals of remarkable quality, rarity, and beauty.”
How it was built
Dr. Wassermann obtained nearly 400 coins, ancient to modern, from around the world, with a special emphasis on coins of Bavaria and Munich, where the family was rooted. In building the collection over six years, mostly from 1931 to 1934, Dr. Wassermann relied on the assistance of many among a “who’s who” of dealers in German numismatics at the time, and sales provenances are recorded for nearly every piece.
The family — father, Felix; mother, Susan; son, Charles; and daughter, Eva — came to New York City in 1938, greeted by their sponsor Edith Rosenwald Stern, a distant cousin and heir to a Sears, Roebuck & Co. owner.
In 1940, Charles F. Wasserman (he dropped an “n” from his last name) graduated from high school and then attended Tulane University in New Orleans, where, in a scene straight out of Hollywood, he met fellow German émigré Eve Daube at a July 4 picnic. Daube had been in a concentration camp before being sponsored to the United States.
In 1945, the couple married and would later have two sons, Gerald and Michael. Charles Wasserman became a well-known pediatrician in New Orleans, and though he did not consider himself a traditional “collector,” he valued the collection as a symbol of his family’s history and heritage. He added a small number of pieces to it, the final known purchases occurring in the 1970s.
Wasserman died in March 2012 and is survived by both sons.
Collection highlights
The collection is peppered with highlights, choice items that would anchor any collection, but the Bavarian section is notable for some “formidable and impressive large medallions,” according to Friedberg.
The chief Bavarian highlight is the undated (circa 1824) gold 18-ducat medallion celebrating the 25th anniversary of the coronation of Maximilian I Joseph. The hefty piece — weighing 62.63 grams — measures 47.8 millimeters in diameter. It has a Proof finish with matte fields and is struck in high relief. The coin has an estimate of 10,000 Swiss francs (about $10,647 in U.S. funds).
The collection reflects the vast coinage of the Holy Roman Empire, including a unique gold schauguldiner presentation piece dated 1509 and struck in Antwerp in 1517 by Maximilian I. The coin was struck after the king requested the use of older dies from the Hall Mint to strike pennies; a small rosette was added to distinguish the restrikes from the earlier issues. Presentation pieces like the coin in the Wasserman Collection were also struck.
In “attractive” Very Fine condition, with sharp details, it has an estimate of 20,000 francs (about $21,292 U.S.).
Though the auction offers only 10 coins from Great Britain from the collection, one of them is what many consider the most beautiful of all British coins, Queen Victoria’s 1839 Una and the Lion £5 coin.
Designed by William Wyon, the coin shows the young queen, representing truth (Una), leading the nation (the lion) into what would become one of the greatest eras of British history.
The coin has a few rim nicks on the reverse and a few hairlines, but is otherwise Proof Choice Uncirculated. It has an estimate of 25,000 francs (about $26,616 U.S.).
The auction catalog is scheduled to be posted online starting Sept. 17 at www.sixbid.com. To bid live, collectors must register before the sale at www.hessdivo.com. Printed catalogs may be ordered from Hess Divo at (011) 41 44 225 40 90 or via email to mailbox@hessdivo.com, or from Künker at (011) 49 541 962020 or via email at service@kuenker.de.