Even copies of coins of Alexander the Great welcome 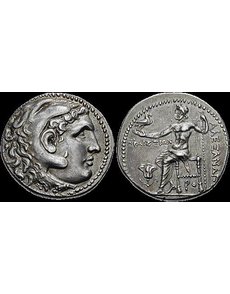 The rose before the seated figure of Zeus marks this silver tetradrachm as a civic issue from the island of Rhodes. The silver coin is thought to have been struck circa 205 to 190 B.C. 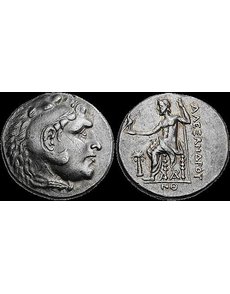 Alexander’s coins were popular in Phoenicia, where this civic issue of the city of Aradus is identified by the palm tree before Zeus. It is precisely dated to 201 to 200 B.C. 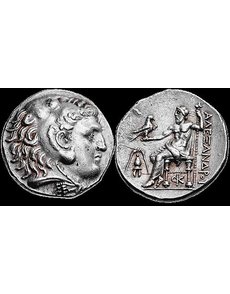 This tetradrachm bears the designs and the name of Alexander III, yet it was struck early in the reign of the Macedonian King Antigonus II Gonatas (277 to 239 B.C.). 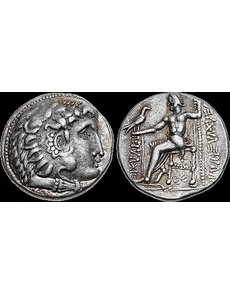 The Celts of Eastern Europe extensively imitated Macedonian coins. This tetradrachm of the third to second centuries B.C. copies Alexander’s types, and approximates their inscriptions.

The coinage of the Macedonian King Alexander III (“the Great,” 336 to 323 B.C.) is one of the most impressive in history.

His coins were a common sight in the Greek world, and they regularly circulated as far away as India and the Arabian Peninsula. Consequently, the main designs of his precious metal coins were famous not only in his lifetime, but for centuries afterward.

Alexander’s main type for silver coinage has on its obverse the head of the mythological hero Heracles wearing the scalp of the Nemean lion, which he slew in one of his early adventures. The reverse shows the seated figure of Zeus, the chief god of the Greeks, who holds a scepter and an eagle.

His main gold coin type shows on its obverse the head of Athena, the goddess who protected men at war, wearing a crested Corinthian helmet. Its reverse shows the standing figure of Nike, the goddess of victory, who holds a wreath and a ship’s mast.

For more than 250 years after Alexander’s death, his coin types were copied by various authorities in Greece, Asia and the Levant, and often were imitated by peoples on the fringes of the Greek world, notably Celts in Europe and the inhabitants of the Near East.

Three categories of “Alexander” coinages were struck after the king’s death: royal, civic and imitative.

The royal issues were struck mainly in Greek kingdoms by rulers who saw the political and economic advantages of adopting the familiar types of the deified Alexander. These royal coins are collected primarily for their historical value. Many bear the name of Alexander as a matter of tradition, whereas others have the name of the issuing monarch — most often that of Alexander’s successor, Philip III (323 to 317 B.C.).

Civic issues typically are collected based upon where they were issued, not by whom.

Most were struck in the third and second centuries B.C. and they vary in appearance. They usually bear a symbol, a monogram or an inscription that represents the issuing city. Some also have dates that are reckoned according to a local era, in which case they usually can be dated to a one-year period.

Most civic Alexander coins are easy to distinguish from those of Alexander and of the Greek kings who ruled soon afterward. Whereas the royal coins tend to be struck in high relief on thick planchets, most of the later civic issues are struck on thinner, broader planchets with dies that were cut in lower relief.

Silver drachms of the Alexandrine type were also struck after Alexander’s death. The largest issues were produced by Philip III. A reasonable quantity was also produced down to about 270 B.C., but only rarely thereafter.

Though gold staters were struck in enormous quantities by Alexander and his immediate successors, very few mints produced Alexandrine staters after about 300 B.C. Not only were these high-value pieces struck less frequently than their silver counterparts, but even when they were issued, many mints chose instead to copy the types that were introduced by Lysimachus, one of Alexander’s generals who ruled parts of Greece and Asia Minor from 323 to 281 B.C.

Almost every posthumous Alexander tetradrachm is a faithful copy of the original design, yet the style of engraving varies greatly since they were struck at so many mints, under so many authorities, and for more than 250 years. This is perhaps the most appealing aspect of these coins — especially the “civic Alexanders.”

For most collectors, the tetradrachms are the most satisfying to collect due to the variety of mints and Mint marks. Often the Mint marks are attractive symbols — “civic badges” — by which the issuing city was identified. These Mint marks often were derived from earlier coin types of these cities, so they rang with familiarity.

Some of the more distinctive symbols include a helmet for the mint of Mesambria in Thrace, the meander pattern for Magnesia in Ionia, a lion and star for Miletus in Ionia, the Sphinx for the island of Chios, Pegasus for Alabanda in Caria, a rose for the island of Rhodes and a palm tree for Aradus in Phoenicia.

It is unfortunate that these late civic issues often are sold as coins of Alexander, even though they were not issued by the Macedonian Kingdom and typically were struck a century or more after Alexander’s death. Not only is it a misrepresentation of these coins, but it denies collectors the ability to enjoy them for what they are — issues of later kings and independent cities.

In recent decades, much effort has been made to describe the posthumous civic Alexander coins correctly, which has sparked a new interest in collecting them in their proper context.

The publication in 1991 of The Coinage in the Name of Alexander the Great and Philip Arrhidaeus: A British Museum Catalogue, by the late Martin Price, paved the way. Its catalog was organized by mint, which allowed for an appreciation of that aspect.

Other scholarly treatments followed, notably the multipart catalog, Seleucid Coins, A Comprehensive Guide by Arthur Houghton and Catherine Lorber, the first part of which, Part I, Seleucus I through Antiochus II, was published in 2002.

A third category of posthumous “Alexanders” comprises imitations struck outside of the Greek world, where coins of the Macedonian Kingdom circulated widely. The Macedonian originals must not have been as available as merchants in these regions would have liked, for many imitations were struck, especially in the form of silver tetradrachms and drachms.

The largest issues were produced in Eastern Europe, north of the traditional Greek lands, though many also were struck farther west, and some were even issued north of the Rhine and the Danube rivers. They were also struck in the Near East and the Arabian Peninsula in significant variety.

Most of the ancient imitative issues are loosely (though recognizably) based on Alexander’s originals. From the many different appearances of their work we must assume local engravers were permitted to make full use of artistic license when creating their dies. ¦