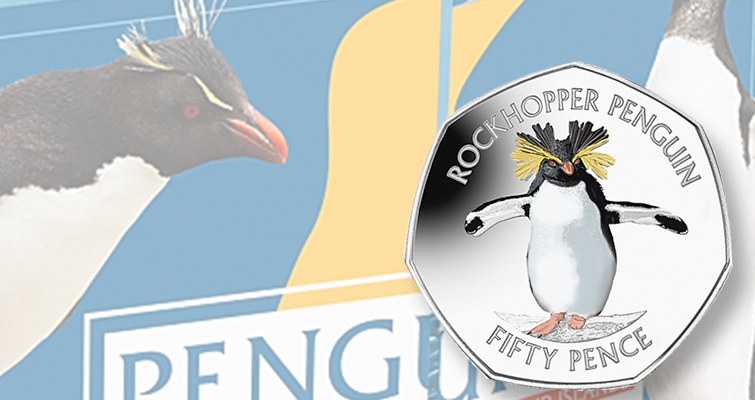 The Falkland Islands are reportedly the “penguin capital of the world” because of the more than 1 million flightless birds that call the islands home.

In 2017 Pobjoy will mint a set of four 50-penny coins depicting indigenous penguins in color, beginning with a coin for the rockhopper penguin.

Rockhopper penguins are remarkable creatures reaching about half a meter tall and weighing no more than 2.7 kilograms. These tiny penguins take their name from the rocky shorelines where they nest in tussocks of tall grasses. The rockhopper in appearance looks similar to other penguins but is easily distinguishable by the black and yellow spikey plume on its head. When you look closer you can see a few other differences, including red eyes and pink webbed feet.

Indigenous to the Falklands, these penguins live on a diet of krill and small crustaceans and sometimes go hunting for days at a time. They can dive to depths of 100 meters to catch their prey and stay down for several minutes before surfacing to take a breath.

When rockhoppers come back to shore they often have to navigate their way up a cliff face; they either climb or ride a wave and try to land at the top. This can be incredibly dangerous for the penguin as sharp rocks and pounding waves can maim and even kill.

Despite the rockhopper being one of the world’s most numerous penguins, since the early 20th century the number of rockhoppers has decreased by 90 percent and they are now considered “vulnerable” by wildlife experts.

The reverse features an adult rockhopper, a quirky penguin with its signature hairstyle. The rockhopper is depicted with its wings raised, poised in a position the penguin takes before it hops.

The obverse features a new and exclusive effigy design of Queen Elizabeth II.

The copper-nickel coin weighs 8 grams, measures 27.3 millimeters in diameter, and has a mintage limit of 7,500 pieces. The coin retails for $11.95 each.

A collector’s pack, intended to hold examples of all four coins, is also available, for $6.