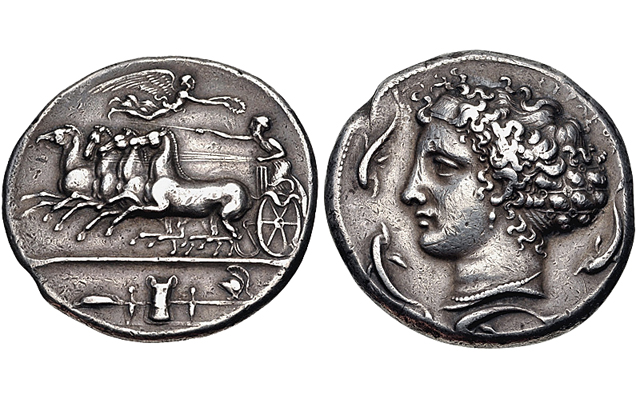 German forger Carl Wilhelm Becker is noted as one of the best at his trade. This imitation of a silver decadrachm of ancient coin engraver Kimon realized $1,092.50, in an online auction closing Dec. 3.

Even fake coins are collectible.

The piece replicates a famous silver decadrachm of ancient coin engraver Kimon and realized a price more than double its $500 pre-sale estimate.

The replica mimics a circa 405 to 367 B.C. silver coin from Syracuse, in Sicily, issued under Dionysios I. The obverse depicts a charioteer driving a fast quadriga, holding reins. Nike flies above, crowning the charioteer. Arethusa is surrounded by four dolphins on the reverse.

The 39.5-gram “coin” was made by one of the most prolific and accomplished counterfeiters of the 19th century.

Becker was making fake coins and other antiquities as early as 1806, apparently as a sideline to a trade in genuine antiquities. His buyers were the wealthy princes of Europe, who filled their cabinets with his work.

“Some of his efforts are of course wide of the mark, but others are as near to the original as anything that his successors have produced,” Hill wrote.

Although Becker was periodically accused of forgery, he defended himself by claiming his productions were “instructive” in nature and never sold with the intent to deceive. Notes found in his diary after his death suggest this was not quite true, and Hill provides multiple instances where examples were sold through third parties at or near the full prices of genuine articles.

Becker was recently the subject of a Coin World story exploring a range of fake coins that are collectible today.

To learn more about the auction, visit the Classical Numismatic Group’s website.