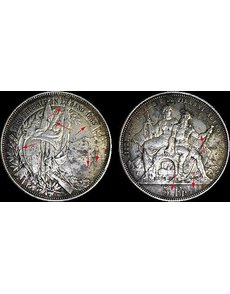 The Sept. 10 column described a fake Swiss-Schwyz 1867 5-franc piece, or Shooting Festival taler. This month we present another fake Swiss 5-franc piece, this time a Swiss-Lugano 1883 5-franc piece, found in the same week as the first. Given the similarities in overall quality and surface texture between these two fakes, it is very likely that they were produced by the same counterfeiter.

This counterfeit has the overall appearance of an About Uncirculated coin, with mostly subdued luster and lightly abraded surfaces.

A closer look at the coin shows that the finer details of the coin are a bit fuzzy, and the fields are more “ragged” than they should be for a coin in this condition. The piece we inspected had been artificially toned, possibly to disguise the odd luster it possesses.

Specific diagnostics for this counterfeit are shown on the images, as follows:

On the obverse of the coin, look for these depressions:

? Touching the top right of the shield indent at 9 o’clock.

? Horizontally across the gun barrel, directly below the I in IN.

? A diagonal depression on the scroll below the LU in LUGANO.

? Another diagonal depression in the upper right-hand field (see image).

? A line depression and a round depression in the lower right-hand field.

On the reverse of the coin, look for these:

? A nearly vertical depression in the field below the I in LIBERTADE.

? A depression on the extended forearm of the male figure.

? A diagonal depression in the lower right hand field.

? A round depression about halfway between the 5 and FR, slightly closer to the 5.

Seeing two fake Swiss Shooting Festival talers in the same week is usually not a good sign, especially when they appear to have been made by the same counterfeiter. It would be prudent to assume that many more of these fakes were produced, including other dates in the series. Collectors interested in buying a Swiss 5-franc coin would be well advised to give a potential purchase a critical look.

As always, dealing with an experienced numismatist will lower your chances of buying a counterfeit coin. If you have any doubts, you can also have the seller submit the coin to one of the major grading services, making the purchase contingent on the coin being certified as genuine.