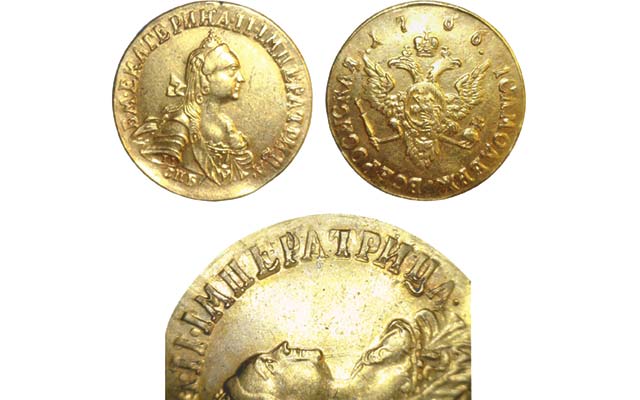 A close-up image of the counterfeit 1766 Russian gold ducat, bottom, shows distorted, malformed lettering on the right side of the obverse, a result of being struck without an edge collar.

An important consideration in authentication is determining if a given coin is valuable enough to attract the attention of a counterfeiter. The fake shown here easily meets this requirement — it is currently listed in the Krause Standard Catalog of World Coins 1701-1800 at $25,000 in Extremely Fine condition. Better date Russian gold coins have been heavily counterfeited for decades, so any example you encounter should be treated with strong suspicion.

The coin’s design features a portrait of Catherine the Great on the obverse, with the St. Petersburg Mint initials (in Cyrillic letters) near the rim at 7:00. The reverse features the Russian imperial eagle as the main device.

The crown above the double-headed eagle symbolizes the emperor’s control over both the church and the state, a concept that dates back to the Byzantine era.

All of the specifications are accurate for this fake, including the weight, diameter, and gold content. This is to be expected with counterfeit Russian gold — evidently the individuals that produced these fakes did not want their product to be too easily detected. Unfortunately for the counterfeiters, they did not take the time or the expense to create top-quality fake dies or properly strike their counterfeits, so there are some easy diagnostics.

During the production of fake dies and the actual striking of the counterfeits, one area that tends to lose definition and accuracy is the periphery.

The close-up image shows the distorted, malformed lettering on the right side of the obverse. You can see how the strength and sharpness of the individual letters fades in and out, especially the tops of the letters, which are closest to the rim. The fields also exhibit a semi-prooflike “shimmer” that is unlike the luster on a genuine coin, although most collectors will not have access to any genuine examples for comparison purposes.