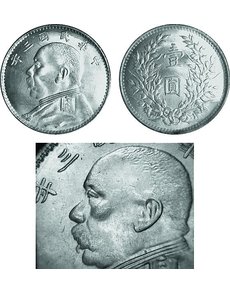 While this counterfeit Republic of China 1914 dollar was executed with skill, the piece exhibits diagnostics that identify it is a counterfeit. On the portrait, for example, a nearly vertical cut appears on the ear lobe, a diagonal mark is found on the center front of the ear, a diagonal mark is located on the temple, and a horizontal mark appears on the forehead, just above the eyebrow.

When we catalog counterfeit coins at ANACS, we always try to locate two or more examples of the same fake.

By comparing pieces from the same dies, we can verify matching depressions, tool marks and other defects on the surfaces, making the identification of other fakes an easier task. One of the problems with the large number of fakes coming out of China lately is that we rarely see duplicates.

The counterfeit of a 1914 silver dollar of the Republic of China shown here is an exception, as the ANACS staff encountered two examples on the same day. In a side-by-side comparison we were able to record more than a dozen diagnostic depressions for this fake, some of which appeared to be normal contact marks at first glance.

The counterfeit itself is a fairly high quality fake, struck from false dies that were executed with skill, so it is good that we could identify it.

On the portrait side of the coin, all of these are repeating marks that can be used as counterfeit diagnostics:

1) The small nearly vertical cut on the earlobe.

2) The diagonal mark on the central front of the ear.

3) The diagonal mark in the temple area, in the same direction as No. 2.

4) The small horizontal mark on the forehead, just above the eyebrow.

The counterfeit exhibits a number of additional diagnostics, but these four details are the easiest to locate. If you have a Chinese Republic 1914 silver dollar that exhibits all of these marks, you can be certain that the coin is counterfeit.

However, many other counterfeits exist for this specific date, so the absence of these diagnostics does not prove that a particular coin is genuine.

As with any coin that has been targeted by counterfeiters, you may wish to have a suspect 1914 silver dollar of the Republic of China certified as genuine by one of the major grading services before you purchase it.