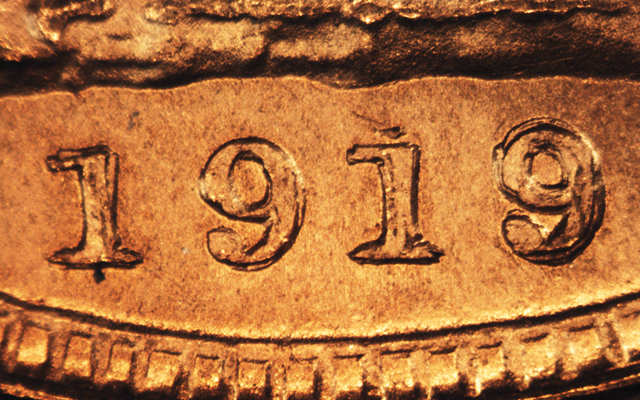 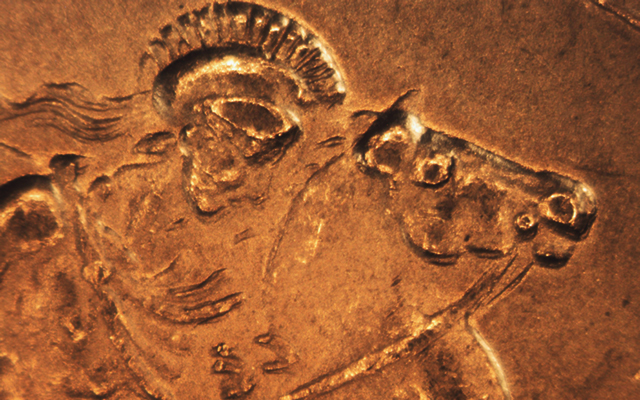 Crude details are exhibited on the horse’s head and neck, and not much more than a few raised lumps representing St. George’s hand holding the reins.

Some counterfeit gold coins are much easier to spot than others, for a variety of reasons. The piece illustrated here, a purported 1919 gold sovereign, is a good example of an easy fake to detect.

First of all, there is no such thing as a 1919 gold sovereign from Great Britain.

While gold sovereigns were struck in Ottawa (Canada), and Sydney, Perth and Melbourne (Australia) in 1919, no sovereigns were produced without a Mint mark, as with the British versions.

Taking a closer look at the fake, you notice that the date digits are rather crudely recut and reshaped.

Additionally, the finer details are either much rougher than a genuine coin, or in some instances missing entirely.

The image of St. George and his horse shows this, with crude details on the horse’s head and neck, and not much more than a few raised lumps representing St. George’s hand holding the reins.

One interesting detail about this counterfeit is that the specifications are correct. The example we inspected was the proper weight, diameter and thickness, with the same amount of gold as a genuine coin.

Normally, a fake with poor workmanship like this piece will contain significantly less gold than it should, and in some cases no gold at all, other than a light plating.

So we are left with the combination of meticulous accuracy with the gold content, and a complete disregard for the finer details of the design.

Trying to look on the bright side, we have a fake that will deceive few collectors who are familiar with the appearance of a genuine coin, and those that are taken in will still own approximately a quarter-ounce of gold.

Keep in mind that ANACS has only inspected a single example — it is entirely possible that other examples of this fake could contain less gold, or none at all.