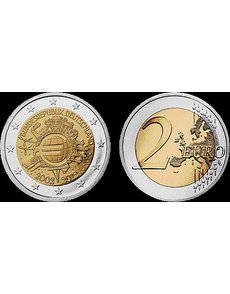 Eurozone nations will soon be allowed to issue two different circulating commemorative €2 coins each year, not counting joint programs like this year’s series honoring the 10th anniversary of the euro’s circulation (the German coin from that program is seen here).

Under new regulations approved in the European Union, eurozone nations may now issue up to two circulating commemorative €2 coins each year in addition to any joint €2 commemoratives.

In addition, the regulations govern the number of coins that can be sold above face value and provide for an end to the 1- and 2-cent coins.

The current structure, which allows only one special design per year, is changing following regulations adopted July 4 and published July 27 in the Official Journal of the European Union. The amendments took effect Aug. 15.

The new two-design limit does not apply to the joint circulating commemorative coin issues, such as the 2012 program marking the 10th anniversary of the euro in circulation. All current eurozone members states are required to issue the joint commemoratives.

The limit also does not apply when an eurozone nation issues new designs to mark a change in leadership, “on the occasion of a temporary vacancy or a provisional occupation of the function of Head of State.”

The additional circulating €2 commemorative coins are optional. Since 2004, eurozone member nations have been permitted (but not required) to issue one circulating commemorative €2 coin per year. A few countries, like Luxembourg and Finland, have chosen to issue one every year, while others (Estonia and Ireland) have abstained. Germany, Spain and Malta have begun annual programs honoring various aspects of those nations’ history and culture.

Director of the Staatliche Münze Berlin (Berlin Mint) Dr. Andreas Schikora confirmed to Coin World that Germany in 2013 will issue two €2 commemorative coins: one continuing the annual Bundeslander series, and the other “a common coin together with France” to mark the 50th anniversary of the Elysee Treaty (Treaty of Friendship) between both nations.

All €2 coins are ringed-bimetallic pieces with a copper-nickel ring and nickel-brass center. Each weighs 8.5 grams and measures 25.75 millimeters in diameter.

On the noncommemorative side (reverse), all €2 coins feature the 12 stars of the original European Union nations in the ring surrounding a central common design showing a map of the union.

Under the changes, the European Commission will also assess the need for 1- and 2-cent coins.

The assessment will include a cost-benefit analysis that takes into account the real production costs of those two coins compared to their value and the benefits of using them in commerce.

In addition, the new rules limit the number of circulating commemorative coins that eurozone mints may issue above their face value; the rules also state that pricing must be justified by special packaging, finish “or any additional services provided.”

The new regulations also addressed the growing number of collector coins denominated in euros that are often issued at or close to face value but are not intended to circulate. In order that collector coins can be easily differentiated from circulation coins, the collector coins must have different face values, the images of circulating and noncirculating coins must not be similar, they cannot “have a shaped edge with fine scallops or a ‘Spanish flower’ shape” (which is used for the 20-cent euro coins), and at least two of the three characteristics of color, diameter and weight must differ significantly from circulation coins. ¦