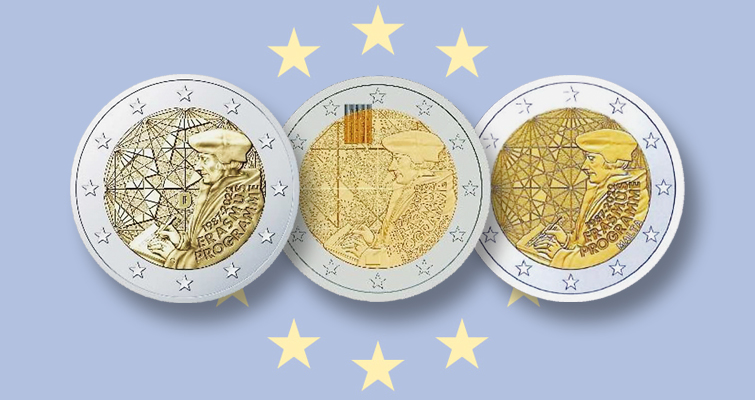 Designs for Europe’s joint circulating commemorative €2 coin for 2022 are revealed, and some appear here.

Designs for a joint circulating commemorative €2 coin program to honor the 35th anniversary of the Erasmus Program in Europe are released.

The ringed-bimetallic coins, which are due to be released July 1, feature the same basic design on their national side.

The design, by Joaquin Jimenez, designer at the Monnaie de Paris, was selected from six options presented for a public online vote.

The design is a mix of two major elements of the Erasmus Programme: Erasmus himself as the original intellectual inspiration, and an allegory of its influence across Europe.

The depiction of Erasmus is from a painting apparently by Hans Holbein the Younger.

Desiderius Erasmus Roterodamus, a Dutch philosopher and Catholic theologian, is considered one of the greatest scholars of the northern Renaissance. The European-based program being celebrated that sends exchange students around the world is named in his honor.

The second element of the coin’s design, beams linking across the coin from one beacon to another, symbolizes the program’s numerous intellectual and human exchanges.

Where some of these links join forms stars, some of which beam forth from directly beneath the individual bordering stars in the outer ring, representing the synergy between the participating countries.

The figure 35 in a contemporary graphical style, for the program’s 35th anniversary, is formed from a treatment of some of the spaces formed between where the beams cross.

The outer ring depicts the 12 stars of the European flag.

Each coin has a reference to its issuing country, and many have edge lettering unique to the specific country. On Luxembourg’s coin, in accordance with the national law, an effigy of the Grand Duke as a latent image is placed at the top.

Individual mintages are generally a million or fewer, but span Malta’s 82,500 pieces and Germany’s 20 million coins. 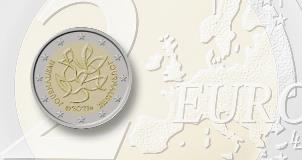 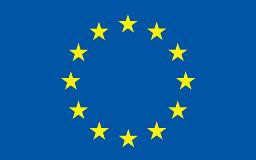 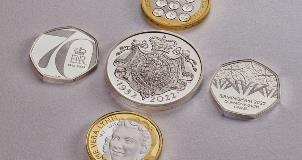