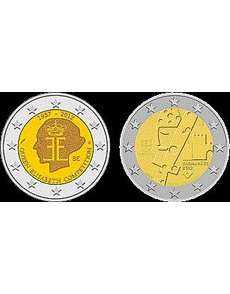 Culture is featured on a pair of €2 coins from Belgium and Portugal: the Belgian coin, left, marks the 75th anniversary of the Queen Elisabeth Competition, while Portugal’s coin, right, notes the role of the city of Guimarães as European Capital of Culture for 2012. 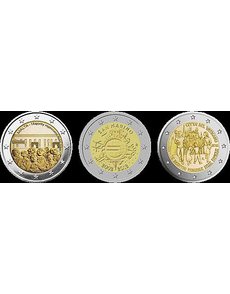 Like the countries of the European Union, the themes for the circulating commemorative €2 coins are wide ranging and diverse. Malta honors a political milestone, while San Marino celebrates the euro currency, and the Vatican City honors the 7th World Meeting of the Families.

Images courtesy of the European Commission and the Central Bank of Malta. 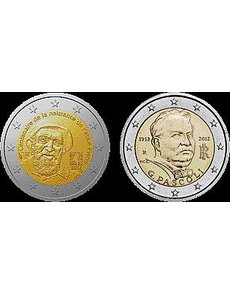 France and Italy both honor famous individuals on €2 coins in 2012. France celebrates the life of Abbé Pierre, who is famous as protector of the poor, while Italy marks the centennial of death of poet Giovanni Pascoli.

Designs and themes for several circulating commemorative €2 coins have been unveiled or confirmed.

National mints and central banks in recent weeks have announced plans to celebrate a variety of themes on the coin, the only circulating coin with a design that can change annually in every nation in the eurozone, the group of 17 nations that issues euro coins.

Poet Giovanni Pascoli, a representative figure of Italian literature from the late 19th century, is featured on Italy’s 2012 circulating €2 coin, which was released April 23.

Born in 1855 in San Mauro di Romagna (which was later renamed for him), the famous scholar was beset by tragedy at a young age, which would later factor in his work. The coin marks the centennial of his death in 1912.

The obverse of the coin, showing a bust of the poet with his name and the years 1912 and 2012, was designed by Maria Carmela Colaneri. The ri monogram represents the Italian republic.

Fifteen million coins are being issued.

The €2 coin shows the emblem of the Queen Elisabeth Competition superimposed over the effigy of Queen Elisabeth, in left profile, flanked by the mintmaster mark at the left and the Mint mark at the right, the latter a helmeted head of the Archangel Michael. Above the effigy are the years 1937-2012, and below it is the inscription QUEEN ELISABETH COMPETITION.

A total of 5 million coins will be issued in May. No designer information was available.

The city of Guimarães in northern Portugal is the theme for Portugal’s circulating commemorative €2 coin for 2012.

The city has been dubbed the European capital of culture for 2012; the coin depicts the first Portuguese king and his sword, and the Castle of Guimarães, which is considered the place where Portugal started in the 12th century as an independent nation.

The coin was designed by Jose de Guimarães, an internationally known artist from the city.

France is honoring on a €2 coin the birth centennial of Abbé Pierre, who is famous as protector of the poor.

The coin shows a portrait of Pierre, wearing a beret. The logo of his foundation is superimposed over a square bearing the microtext reading ET LES AUTRES? (which was his favorite motto, translating to “And others?”), recalling that one should never forget to help others, is to the right of the portrait.

Also on the obverse are the letters rf (for “République Française”) together with the horn of plenty, Mint mark of Monnaie de Paris on the left side, and the fleurette hallmark of the engraving workshop on the right side. No designer information was available.

A mintage of 1 million coins is due for release sometime in July.

A €2 commemorative coin relating to Malta’s constitutional history will be the second in a five-year series.

The 2012 design will mark the 125th anniversary of majority representation, which began in 1887. According to the Central Bank of Malta, the coin will be issued in September.

Gianni Bonnici designed the obverse, which shows a crowd of people gathered in the foreground, with a building in the background.

The 7th World Meeting of the Families is the subject of the €2 coin from the Vatican City.

The coin features a family with the Cathedral of Milan in the background. No designer information is available.

In total, 115,000 coins are to be released, at a date that has not yet been determined.

If the design for San Marino’s coin looks familiar, there is good reason: the coin features the same design that 17 eurozone members have issued or will issue as part of a joint program to mark 10 years of the euro currency.

The euro symbol is surrounded by other design elements from the financial world, industry, energy and more.

San Marino is one three nations (with Monaco and the Vatican City) to issue euro coins per agreements with the European Union as a link to when they issued legacy currencies before the euro was adopted a decade ago. These three nations, which are non-EU members, do not officially participate in the joint programs such as the 2012 anniversary issue but do officially issue euro coins.

All €2 coins are ringed bimetallic pieces with a copper-nickel ring and nickel-brass center; each weighs 8.5 grams and measures 25.75 millimeters in diameter. All €2 coins feature the 12 stars of Europe in the ring surrounding a central common design. ¦