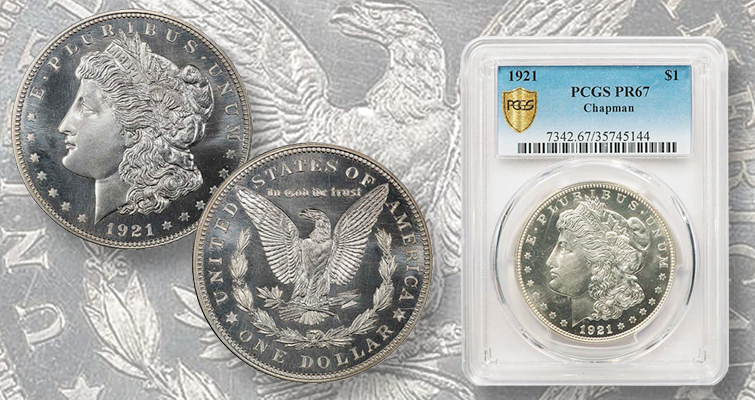 A Chapman Proof 1921 Morgan dollar graded Proof 67 is described as “unquestionably the FINEST EVER Chapman Proof that exists” and carries the top estimate in Legend’s Nov. 15 Regency Auction 29 in San Antonio. 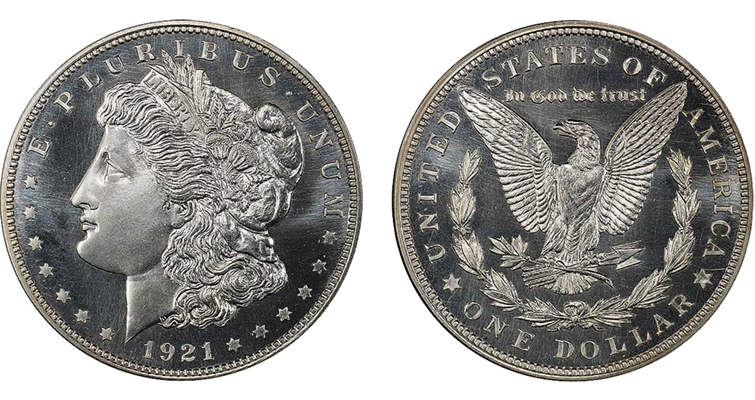 Regarding this coin Legend writes: “Full proof mirrors beam endlessly from all over. The mirrors enjoy great clarity and cleanliness. In fact the only mark we can find-is on the holder.” 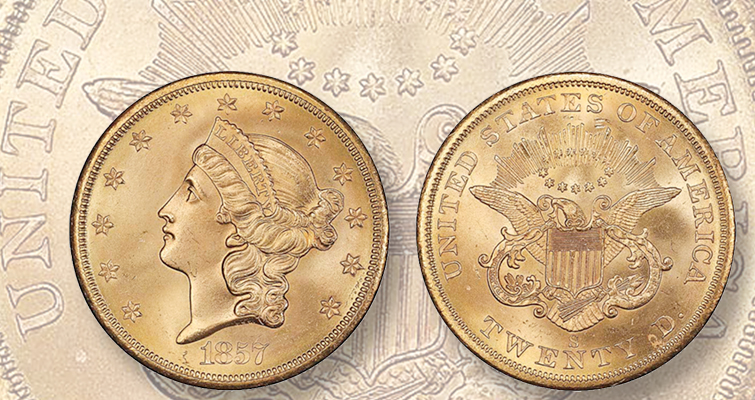 One of the finest known 1857-S Coronet double eagles recovered from the SS Central America “Ship of Gold” treasure is graded PCGS MS-67 and offered in Legend’s Nov. 15 Regency Auction 29. 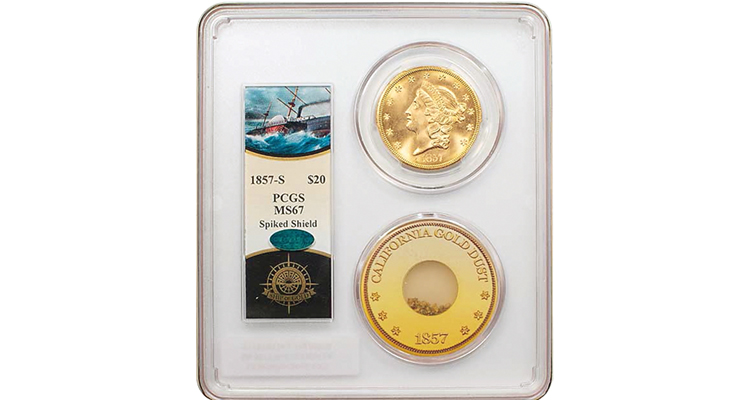 The 1857-S double eagle in the Legend auction is one recovered from the SS Central America “Ship of Gold” treasure, and is graded PCGS MS-67 and housed in an oversized holder with a pinch of California gold.

Two coins with fascinating back stories are among the top lots at Legend Rare Coin Auctions’ Regency Auction 29, set for Nov. 15 at the Hyatt Regency San Antonio Riverwalk as part of the Professional Coin Grading Service Members Only show in Texas.

In 1921, hobby promoter Farran Zerbe and Philadelphia rare coin dealer Henry Chapman requested that the Philadelphia Mint produce Proof dollars to satisfy collector demand for the new, one-year-only Morgan dollar, which had been on hiatus since 1904 and would be replaced in December 1921 with Anthony de Francisci’s Peace dollar. Among the two Proof types, the Chapman Proof 1921 Morgan dollars come closer to the overall look of the 1878 to 1904 Proof dollars, with deeply reflective mirrors and a sense of contrast between the frosted devices and the deep fields. The Zerbe Proof dollars are more prooflike in comparison. Despite a reported mintage of 10 to 15 coins, population reports suggest that between 40 and 50 Chapman Proofs were struck.

Legend writes: “Full proof mirrors beam endlessly from all over. The mirrors enjoy great clarity and cleanliness. In fact the only mark we can find-is on the holder.” The firm concludes: “Think these are incredibly rare or what? If you are building a top or #1 Proof set, this is your only chance at a great Chapman Proof.”

Heritage described the qualities of the Chapman Proofs when it offered a Chapman Proof 1921 Morgan dollar graded Proof 65 by Numismatic Guaranty Corp. in July, writing, “Relative to the 1921 Morgan dollars made for commerce, the wreath is unusually well-struck. The dentils are squared off, and the hair above the ear shows nearly full detail. The surfaces lack the bagmarks characteristic of even the highest-graded business strikes. The fields are nicely mirrored.” That dollar, which included the characteristic Chapman Proof die markers, among themg a diagonal line above the first T in STATES and another die line between the wreath and the right-side star on the reverse, sold for $72,000.

While Legend’s offering is estimated at $225,000 to $275,000, the auctioneer reminds bidders of its status as the finest known, assuming that this is the same coin as one recorded on the NGC Census in the same grade, and warns, “Even if you offered $500,000, you have zero chance of another appearing.” Legend wrote that the last Proof 66 Chapman Proof to sell at auction was in 2000 for $60,375, although Legend’s Dec. 18, 2014, Regency Auction included one graded PCGS Proof 66 with a green Certified Acceptance Corp. sticker that brought $123,375 when it too was offered as “the finest known” and sold nicely above its high estimate of $100,000 at that sale.

The promise of additional treasure from the SS Central America has focused attention on the glorious 1857-S Coronet double eagles that emerged from this wreck. Legend will be offering one of the finest, graded Mint State 67 by Professional Coin Grading Service with a green CAC sticker.

The surfaces are free of all nearly all marks, with Legend adding, “Unbelievable surfaces are exactly that. Even using a strong glass and skimming the satiny surfaces for a few minutes will yield you NO imperfections-not even tiny ones.”

The offered coin is from the more recent recovery efforts from the shipwreck site off the coast of the Carolinas in the Atlantic Ocean (the ship sank during an 1857 hurricane, carrying to bottom tons of gold), and from these recently certified examples PCGS has graded just three MS-67, with a single MS-67+ piece that is the finest known. These were added to the eight PCGS MS-67 examples that were found during the last exploration of the shipwreck, and the PCGS Population Report currently lists 15 in MS-67.

The SS Central America carried thousands of 1857-S Coronet gold double eagles that were later recovered, making the issue accessible to collectors. As Legend points out, “Prior to this wreck being discovered, there was no such thing as even an MS64 [example of the coin]!”

The example in the auction is offered in a large-sized PCGS special holder with some California Gold Dust, is of the “Spiked Shield” variety, and carries an estimate of $165,000 to $180,000. The variety gets it name from a pair of die lines near the left shield border, and many were found in the “Ship of Gold.” 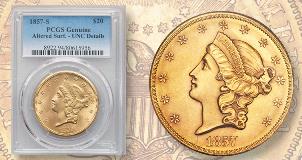 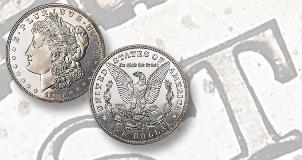 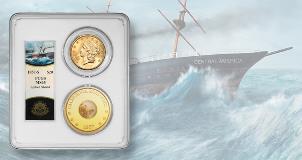