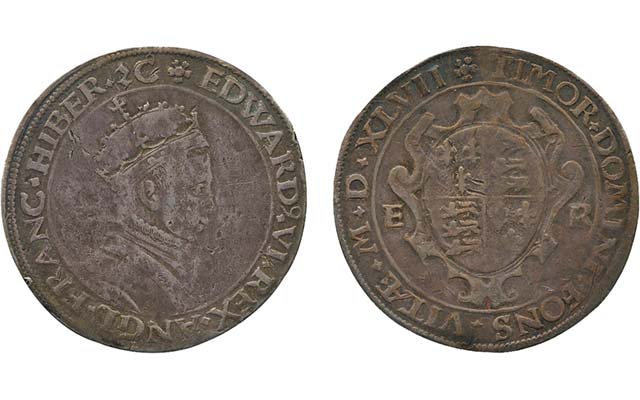 One of four privately held 1547 pattern testoons of Edward VI is part of A.H. Baldwin & Sons Ltd.’s May 5 auction in London.

One of four privately held silver pattern testoon or shilling pieces of Edward VI highlights a May 5 auction scheduled by A.H. Baldwin & Sons Ltd. in London.

The 1547 pattern was struck at the Tower Mint in London.

According to the auction house, the silver pattern “of such intricate engraving detail must have been produced to show that the new King, though of a young age, was powerful and also the new Head of the Church of England.”

At the age of 9, Edward VI succeeded his father, King Henry VIII, but coinage early during the young king’s reign was made in his father’s name.

According to “The Base Silver Shillings of Edward VI” by Joe Bispham, in the British Numismatic Journal, Vol. 55 (1985), the pattern testoon was an early prototype piece for the shilling coinage and may have been produced for presentation.

The auction firm provides a provenance for the piece back to an auction in 1901.