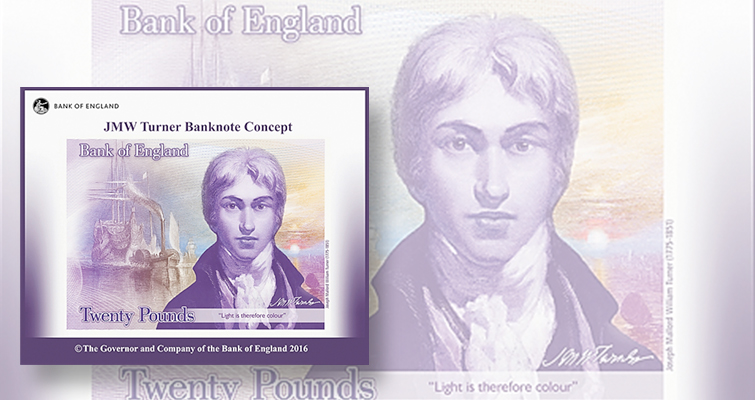 The bank’s April 22 statement said that Turner prevailed over a field of 590 names nominated in 29,701 public submissions. It is the first time the Bank of England used a system set up two years ago in which a Banknote Character Advisory Committee oversaw the selection process. First it determined that the subject would represent the visual arts. Then a two-month nomination period resulted in the list of candidates. The committee conducted focus groups and came up with a short list of five that it gave to the bank’s governor, who made the decision.

A concept note provided by the bank includes the following features: Turner’s self-portrait, painted circa 1799 and currently on display in the Tate Britain museum in London; Turner’s painting The Fighting Temeraire, a tribute to the ship HMS Temeraire that played a vital role in Adm. Horatio Nelson’s victory at the Battle of Trafalgar in 1805 and which was voted Britain’s greatest painting in a 2005 BBC poll; a quote,  “Light is therefore colour,” from an 1818 lecture by Turner referring to his innovative use of light, shade, color and tone in his paintings; and Turner’s signature from his will, in which he gave many of his paintings, including The Fighting Temeraire, to the nation. The final design and its security features will be revealed at a later date.

The £20 bank note will be the third denomination printed on polymer. The £5 note will be issued in September and the £10 note in 2017.

Bank of England Governor Mark Carney said that Turner “is perhaps the single most influential British artist of all time.” He was known as “the painter of light” because of his ability to convey the subtlest shifts in color and atmosphere, especially in his landscapes and seascapes. His later works are characterized by innovation in their focus on light and atmosphere instead of their subject. He had an influence on the French Impressionists that the bank says has “extended across continents and through time to touch the artists of the modern period.” 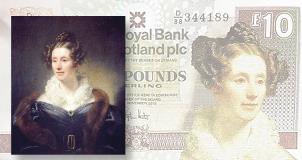 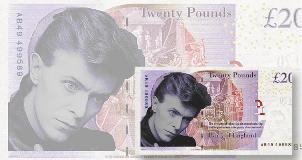 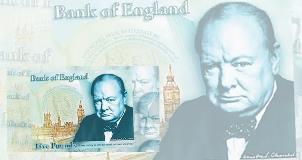