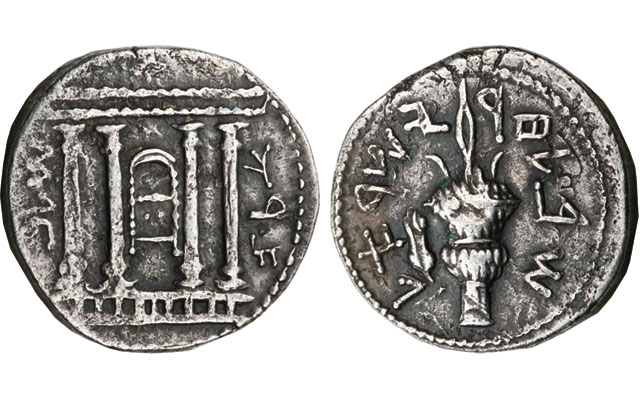 The Bar Kochba Revolt led to the issuance of emergency coins. The most iconic might be the sela or tetradrachms that show the temple in Jerusalem. 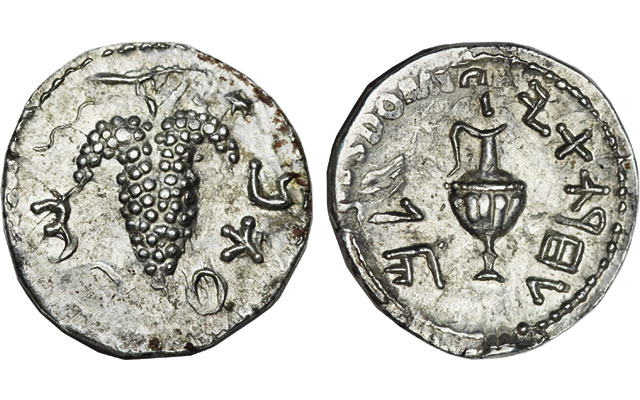 Sometimes Bar Kochba coinage includes details of the undertype coin, like this Year 3 (circa 134 to 135 A.D.) silver zuz that was struck on a denarius of Roman emperor Domitian.

Editor's note: The following is the second of a five-part Coin World series about collecting emergency coinage, prepared by Jeff Starck for the March 2015 monthly edition of Coin World.

War between the Romans and Jewish resisters in Jerusalem several centuries later forms the backdrop for another issue of emergency money.

The revolt against the Romans began in A.D. 66 and eventually led to the destruction of the Jewish Temple in Jerusalem and the massacre of the Jewish resisters in A.D. 70.

The final period of this bloody struggle was known as the Bar Kochba Revolt. Simon Bar Kosiba took the name Bar Kochba, which means “Son of a Star,” and became the commander for the Jewish forces.

As the revolt progressed, coinage was needed for use by the Jews. Silver and bronze Roman coins were overstruck with Jewish images and legends.

Coins were issued for five years, and are available in multiple denominations. Expert David Hendin explores them in Guide to Biblical Coins, now in its fifth edition.

The designs vary, though, with numerous symbols of import to the Jewish people.

The silver sela or tetradrachm features what may be the most symbolic design, the only numismatic representation of the Jerusalem Temple, although it is unclear whether it is meant to depict the Herodian temple destroyed by the Romans in A.D. 70 or a new temple longed for by the messianic Shimon bar Kochba and his followers.

Many examples of Bar Kochba coinage display enough details to determine the coin serving as the undertype or planchet for the newly fashioned emergency money.

On the other end of the price scale, nine different coins of various dates, denominations and conditions sold Jan. 6, 2015, in the New York Sale auction, for prices ranging from $298 to $995, including the 17 percent buyer’s fee.