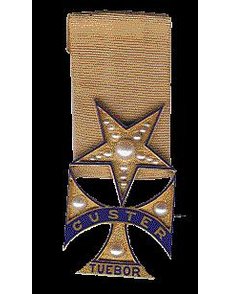 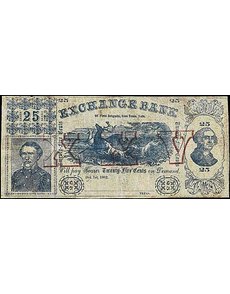 The general’s wife won the battle of the bidders during a recent Spink USA auction.

Her husband’s Military Order of the Loyal Legion of the United States badge sold for $40,350 at the same auction.

The items were sold during a Collector’s Series auction Aug. 22 to 23 by Spink USA.

Mrs. Custer’s gold and pearl badge had been specially made for her by Tiffany & Co. and given to her by her husband. The badge is composed of 14-karat gold with blue enamel and pearls, and is mounted on a yellow-gold grosgrain ribbon. It is in the form of a Maltese cross with the top bar as the bottom point of a five-pointed general’s star.

The star’s borders are etched and outlined in blue enamel and the word CUSTER appears just below the horizontal bar of the cross and TUEBOR, (a Latin phrase that translates to “I will defend”), is below the bottom of the cross. “Tuebor” is a motto used on the Great Seal of Michigan. (George Custer was raised in Ohio and Michigan, and Elizabeth Custer was born in Michigan.) A mixture of small and large pearls decorates the badge.

According to Civil War researcher, author and collector John Peter Beckendorf, Mrs. Custer’s badge “had been lost to history for over 140 years. It does not show up in any known photographs after 1866.”

The general’s MOLLUS medal, bearing his membership number 1641, was presented to him in 1865 by a military officer’s society after the surrender of the Confederate States of America. The Military Order of the Loyal Legion of the United States “was a post-war society limited to officers who had served during the war. Nearly all of the officers of importance were members. They each had a membership number and were presented with badges and certificates of membership, both reflecting this number,” according to Beckendorf.

Custer’s MOLLUS badge, is gold, highlighted with red, white and blue enamel. It is in the shape of a modified Maltese cross with an American eagle at the center on one side and a capped fasces with crossed swords that intersect a half wreath with 13 stars above. A red, white and blue silk ribbon is attached through a small loop at the top of the badge.

The Custer items were consigned by the daughter of a couple who befriended the niece of the woman who was Mrs. Custer’s longtime assistant. The consignor related details about the whereabouts of the items since they were last seen publicly.

The Spink USA auction also offered world notes, and more than 200 lots of Colonial, Confederate States of America and southern states notes, including the Edward Gurley Collection of Confederate and Southern States Currency.

A Confederate states obsolete note sold Aug. 22 for $4,987. The 1862 $50 Virginia Treasury note has an inverted Roman numeral L in the center of the face of the note. The note is graded choice About Uncirculated rather than Uncirculated “due only to a light corner fold and some minor teller handling.”