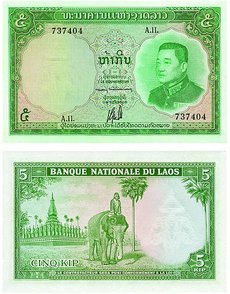 The face of this 5-kip note of Laos might not intrigue a collector but the depiction of an Asian elephant and a rider on the back should do the trick.

Ask most Americans what their idea of a “large” animal is, and something like a 130-pound rottweiler would be a popular choice.

Those with farming or hunting experience might mention a cow or an elk as their top pick for a hefty four-footed creature. Put that same question to the citizens of the rest of the world, and you would get a much better idea of the outer limits of bulkiness.

In North America and Europe, elephants are seen only in zoos and at circuses, but it’s a totally different story in Asia and Africa. The 4-ton beasts are a common sight in tropical climates. In the wild, elephants are an imposing presence and they can cause a great deal of damage. When these intelligent animals are properly trained, they become the ultimate beast of burden.

Elephant trivia provides a glimpse at the massiveness of the species. An adult male will consume 300 pounds of vegetation a day, and up to 15 quarts of water can be held in the animal’s trunk.

Is it any surprise that elephants turn up with some frequency on the paper money of the nations where they are found?

Collectors who prefer vintage notes to recent issues can choose from a pair of pachyderm scenes on the French Indo-China 10-cent and 200-piastre notes that circulated in the 1950s.

The fractional piece displays a market scene with elephants on the back, while the 200-piastre notes feature a single heavy-tusked elephant and a pair of water buffaloes.

The 10-cent note is quite affordable, while the high-denomination note is suitable for bigger budgets.

The back of the 1,000-franc notes from Cameroon, first issued in 1985, features a large elephant in the foreground with a giraffe in the distance. Collectors should plan on spending $10 to $15 to purchase this note in Crisp Uncirculated condition.

Why not grab three elephants for the price of one? Check out the Kenyan 1,000-shilling notes of 1997 to 2002 to find a trio of these floppy-eared giants. The current exchange rate for this note is approximately $10.65 U.S., so add a reasonable markup to arrive at a price for a CU example.

Relatively speaking, the Asian elephant is smaller than the African variety, but no one is going to refer to a 3-ton beast as dinky. The Laotian 5-kip note issued from 1962 through the 1970s is one of many Asian notes with an elephant theme. The animal and its rider share the back design with a Buddhist temple on the Laotian note. Cost-conscious collectors will like this green note, as it combines a great vignette with a low price tag.

Malawi’s 200-kwacha notes were the nation’s highest-denomination notes when they were first issued in 1997. The eye-grabbing back design shows three full-grown elephants. The 200-kwacha note is one of a number of Malawian issues that features attractive and distinctly local themes.

A person doesn’t have to be an animal lover to appreciate the light blue 10-rupee/10-kyat notes issued by the Union Bank of Burma (modern-day Myanmar) in the late 1940s and 1950s. One look at the elephant wrestling with and lifting a large log, with tree stumps in the background, will make the hobbyist’s ever-present “I want to buy that!” impulse kick into high gear. Reaching for your wallet won’t be a painful experience, as this classic design sells for well under $10 in circulated grades and $15 or less in CU.

Since South Africa is a popular destination for big game hunters, it’s no surprise to see elephants on the red-brown 20-rand notes that were first issued in 1992. The person who wants large animals for a puny price will get exactly that with one of these notes.

An elaborately costumed elephant and trainer can be found on the face of the Sri Lankan 1,000-rupee notes that entered circulation in 1991. Add in a depiction of a gaudy peacock on the back, and this note becomes something that stands out from the pack.

A mother elephant and her offspring (birth weight: 225 pounds) are positioned in the lower left corner of Tanzania’s 1,000-shilingi notes of 1993. This note depicting sweet maternal care shouldn’t cost more than $12.

In a scene that could serve as an artist’s rendition of Noah’s Ark, an elephant shares the back design of the 1987 5-shilling notes of Uganda with an assortment of other animals. Add this brown note to your collection for a $1 or so.

A somewhat less benign-looking pachyderm dominates the face of the 500-shilling notes of the 1990s, and this note is another very affordable option for the elephant lover.

The “on the job” theme can be found on Vietnam’s 1,000-dong notes of the late 1980s, as a muscular elephant drags logs with what appears to be little strain on his part. An example of this note can be obtained by even the most cash-strapped collector.

Elephant notes dating back to the 1920s also exist, but they tend to sell for high prices. For the most part, the cost-conscious shopper can put together a wide-ranging and artistically appealing topical collection of elephants for the cost of what it would take to feed a chihuahua. Who could complain about that kind of low-budget opportunity? ¦