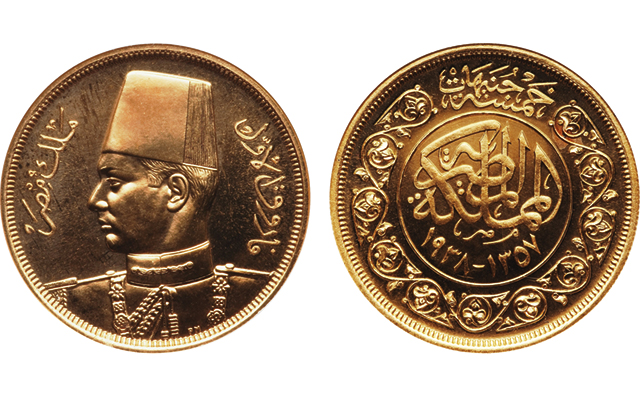 When Egypt’s King Farouk married Queen Farida in 1938, a gold 500-piastre coin was among the commemorations. A Proof 65 example, graded by NGC, realized $7,050 during Heritage’s CICF auction.

Egypt’s King Farouk is remembered by the hobby fraternity today for the famed coin collection that he built before being deposed in 1952.

His collection included a 1933 Saint-Gaudens gold $20 double eagle, and the auction of his collection in 1954 (minus that coin) drew collectors from around the world.

A collector unfamiliar with the language of the coin’s inscriptions would have no way of knowing that the coins celebrate a wedding, since only the king is shown on the obverse. The marriage would end in a divorce in 1948, and four years later the king would be exiled.