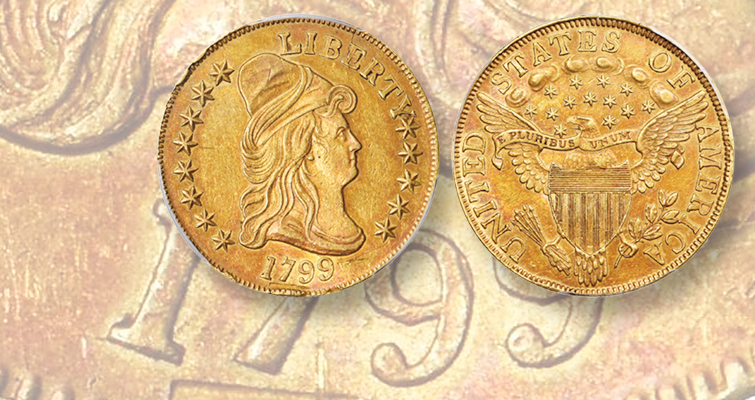 A handsome 1799 Capped Bust, Heraldic Eagle $10 eagle with nice AU details has an unfortunate couple of scratches near the date. Its flaws made it more affordable to a type collector. It brought $6,600 in a recent Stack's Bowers auction. 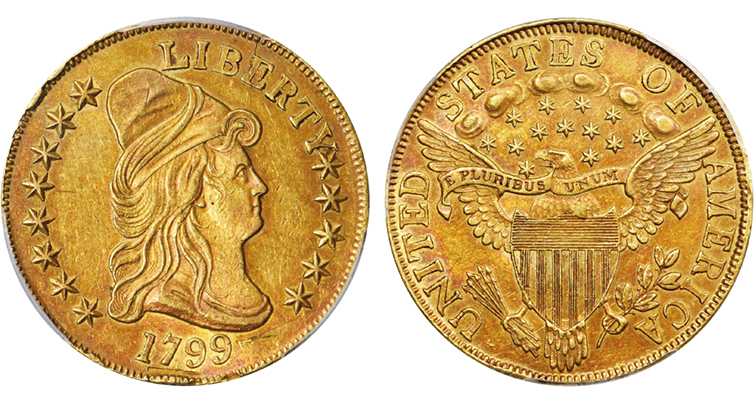 Aside from a scratch near the date, this 1799 Capped Bust, Heraldic Eagle, Small Obverse Stars variety gold $10 eagle is particularly pleasing, having “overall sharp detail and handsome patina,” with “deep khaki-orange color" and “vivid undertones of pinkish-rose,” and a nicely centered strike.

Gold coins struck in the 18th century at the Philadelphia Mint are always expensive. But occasionally, a problem or two can make an otherwise unobtainable example affordable.

Stack’s Bowers Galleries offered a 1799 Capped Bust, Heraldic Eagle gold $10 eagle at its recent Baltimore Expo auction. Listed as BD-7 in the Bass-Dannreuther reference to the early gold series, it is called the Small Obverse Stars variety in the “Red Book.”

The offered example was particularly pleasing, described as having “overall sharp detail and handsome patina,” with the cataloger adding, “Deep khaki-orange color dominates the in hand appearance, direct lighting calling forth vivid undertones of pinkish-rose.” A nicely centered strike and pleasing general appearance made this a solid example for type purposes.

A shallow obverse scrape in the lower right obverse field and a scrape below the date led Professional Coin Grading Service to grade it Genuine, About Uncirculated Details, Scratch. It sold for an affordable — for the type — $6,600 at the Feb. 28 Rarities Night sale.