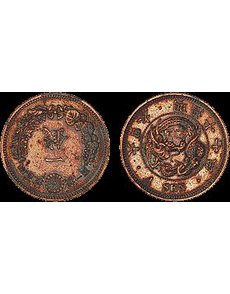 Dragons have graced the coins of many Asian nations for centuries. This copper sen is from Japan, struck in 1873. 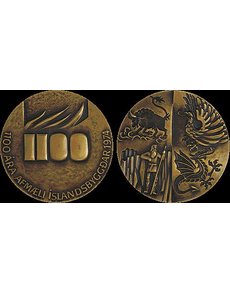 Dragons symbolize the nations of Wales, China, Bhutan and Iceland. In 1974 Iceland honored its four guardian spirits on this high relief medal. The four are a bull, a giant, a bird and a winged dragon. 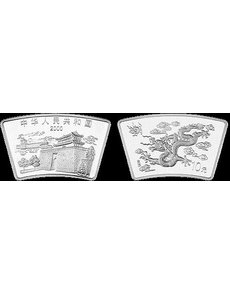 China’s 2000 Year of the Dragon 1-ounce .999 fine silver coin is in a fan shape. As China’s prosperity grows, so do the numbers of coin collectors and the demand for commemoratives like this one. Growing numbers of collectors and static supplies will translate into higher prices for the coins in the marketplace. 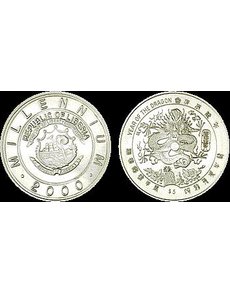 Dragon coin collectors tend to have a lot of Liberian coins because dragons have been a popular theme on that nation’s coinage since 1997. The $5 Prosperity dragon is one of a series of three Dragon coins issued in 2000. 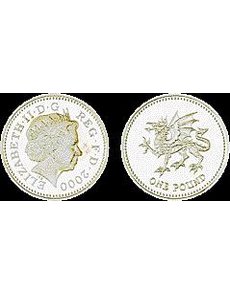 The dragon is found in legends worldwide. The famous Welsh red dragon’s wings on the United Kingdom’s pound coin issued in 2000 identify it as a Western dragon. Eastern dragons fly, too, but always without wings. 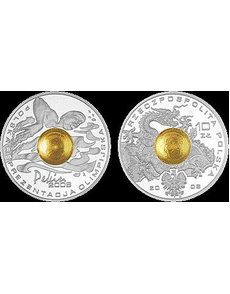 Poland’s 2008 Beijing Olympic silver 10-zloty commemorative coin features a dragon to symbolize China. The ball in the center protruding through both sides is plated with pure gold. 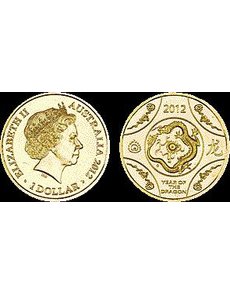 The Royal Australian Mint offers three 2012 Year of the Dragon coins, including this base metal dollar, in addition to silver 1-ounce and half-ounce coins, the latter with a colorized red dragon. 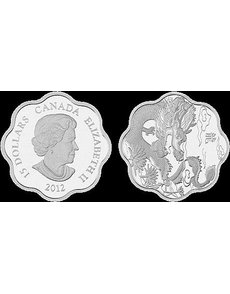 Canada’s 2012 $15 scalloped edge Lotus Dragon coin for the Year of the Dragon features the Chinese character that translates as “Dragon.”

Animal coin collectors are rejoicing because new dragon coin designs are everywhere. The Year of the Dragon in the Chinese Lunar Calendar (Jan. 23, 2012, to Feb. 9, 2013) is upon us.

Dragon years come along once every 12 years but are especially festive because they are said to be the luckiest of all. Dragons are the symbol of royalty and wealth in the Far East.

Many kinds of dragons are found in Chinese mythology and in the legends of other Asian countries, but the “treasure dragon” with the pearl is perhaps the best known to collectors. You see it on many different coins and medals. A large orb floating right out in front of the dragon or tucked under its chin is the giveaway. This flaming ball is actually the pearl of wisdom, the greatest treasure of all.

In the West, dragons also have scales, fly through the air and breathe fire, but that is where the similarity ends. Western dragons are destructive winged beasts that must be slain by saints and knights in order to save villages from annihilation. In recent years, however, dragons have been portrayed more kindly in some American films, i.e., Pete’s Dragon (1977), Dragonheart (1996) and Shrek (2001). Some dragon fanciers trace this gentler dragon redesign in the West to 1963 when Peter, Paul and Mary recorded the hit song, “Puff the Magic Dragon.”

Canada has embraced the dragon with silver issues of various denominations in 2000, 2009 and 2012. Among Canada’s different dragon coins minted for 2012 is one with a scalloped edge that “echoes the dragon’s serpentine shape.” This silver $15 coin is also lined with lotus flowers, and clouds of good fortune.

Australia is another nation that has used the Chinese lunar calendar as coin design inspiration. Its three options for 2012 all depict treasure dragons and include a 1-ounce silver coin, a half-ounce silver coin with colorized red dragon, and an Uncirculated base metal dollar coin. The latter has been packaged in the traditional lucky red envelope used to hold gifts that are exchanged in Asia to celebrate the new year.

Like the panda, the dragon is an internationally recognized symbol of the nation of China. Poland took advantage of this association in creating a silver coin to celebrate the Olympic Games in Beijing. One side of the 2008 10-zloty coin features an Olympic swimmer and the other side, a dragon. A gold-plated orb, perhaps meant to represent a pearl, protrudes through the middle on both sides of the coin.

The copper Japanese sen from the 1870s with the dragon and the pearl of wisdom is sometimes mistaken as Chinese by beginning collectors. The chrysanthemum on the obverse helps to identify these coins as from Japan.

Another sure way to distinguish the nationality of dragons is by counting claws. Japanese dragons have only three toes on each foot. Korean dragons have four claws and the feet of dragons on Chinese coins have five digits each.

During the last Year of the Dragon in 2000, China issued a fan-shaped 1-ounce silver 10-yuan coin. Due to that nation’s increasing prosperity, the mintage of 66,000 coins proved inadequate. The growing legions of coin collectors in China and Hong Kong have driven up the value of this coin, which sells these days at around $500 to $550, more than 10 times its original issue price.

Dragon-themed coin collectors tend to buy a lot of Liberian coins because Liberia has issued many different Dragon and Year of the Dragon coins since 1997. In 2000 Liberia released a matching $5 and $20 series including a trio: the Prosperity Dragon, the Good Luck Dragon and the Happiness Dragon. Liberia also issued 2000 Dragon coins in 5-cent and $1 denominations.

Dragons are found in legends worldwide but officially symbolize the nations of China, Bhutan, Wales and Iceland. The famous Welsh red dragon has long been a symbol of that member of the United Kingdom, representing Welsh determination to repel external threats. The motto “The red dragon will show the way” often accompanies the Welsh dragon. The wings mark it as a Western dragon. Eastern dragons fly, too, but always without wings.

A dragon is one of four guardian spirits representing the nation of Iceland. In 1974 that nation issued a high relief medal celebrating its 1,100th birthday with all four guardian spirits from the nation’s coat of arms: A bull, giant, bird and winged dragon. As the 1,000-year-old legend goes, these four spirits worked together to successfully repel a Danish invasion and continue to look out for Iceland to this day. ¦