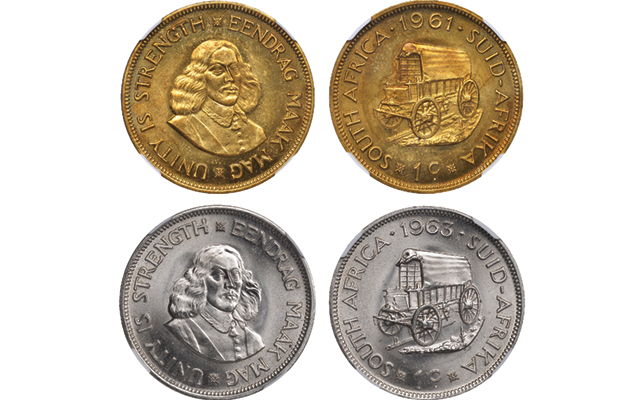 A pair of coins from South Africa’s early decimal coins are part of the Robert Bakewell Collection. The 1961 bronze cent, top, is one of perhaps 20 known struck for circulation with a “cluttered” area beneath the wagon, while a nickel pattern from 1963, lower images, is one of just five examples struck.

But it also includes highlights like low mintage circulating coins and the patterns created in the process of changing coin designs. All coins in the Bakewell Collection have been graded and encapsulated by Numismatic Guaranty Corp.

In 1961, the Union of South Africa became a republic and, after a few years’ groundwork, decimalization came to the nation’s coins.

The image of Jan van Riebeeck, the Dutch settler who landed at the Cape of Good Hope in 1652 to establish a waystation for Dutch East India Company ships, replaced the British monarchs that used to appear on the obverse of coins.

The coin features a Voortrekker wagon on the reverse (which was known as the “Volkswagen” of southwest Africa), according to Money in South Africa by C.L. Engelbrecht.

After the first batch was struck, the then-director of the South African Mint, J.P. Roux, thought that the space below the wagon appeared too cluttered.

The dies were changed to reduce the "clutter," though without consulting the artist Hilda Mason, whose initials were left on the coin, the auction firm said.

“So, although it [the first version of the coin] may be deemed by some as a semi-pattern, these coins are normally given currency status since they were struck as part of a normal production run and most were placed into general circulation,” according to the auction catalog.

Because the value of silver was rising, changes in sizes, denominations and metals were soon implemented, within a few years of the decimalization launch.

A 1963-dated cent bearing the updated cart design, but struck in nickel as a pattern, is an appropriate companion highlight to the other rarity.

Engelbrecht wrote, “During the period when new coin proposals were being considered, interesting and numismatically and historically important specimens of pattern coins in nickel and bronze were struck in small numbers.”

Bakewell’s collection includes some 56 lots of pattern coins, most from this period.

The 1964 nickel cent is one of five examples reportedly struck, and is “virtually as struck,” with an MS-64 grade from NGC.