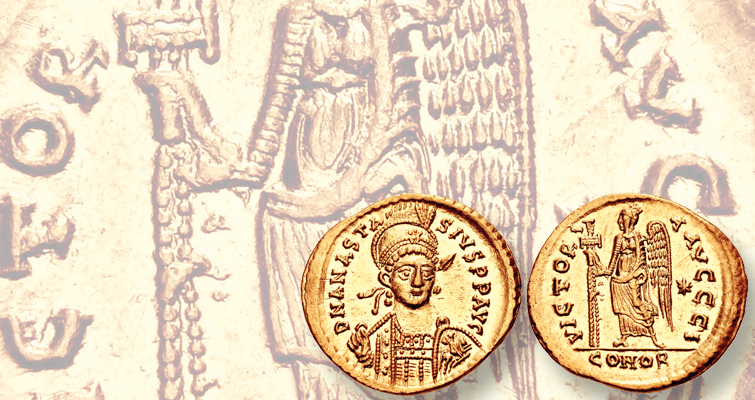 This gold solidus of Anastasius (491 to 518) uses the designs of earlier emperors: the facing military bust of the emperor and the standing figure of Victory holding a long cross. 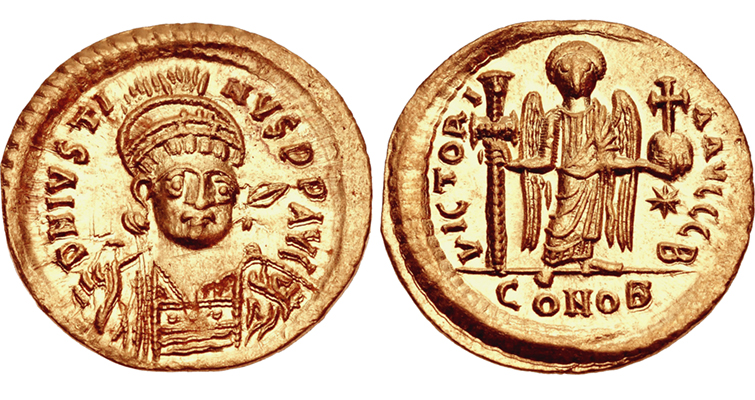 The Emperor Justin I (518 to 527) here replaces the figure of Victory with an angel. 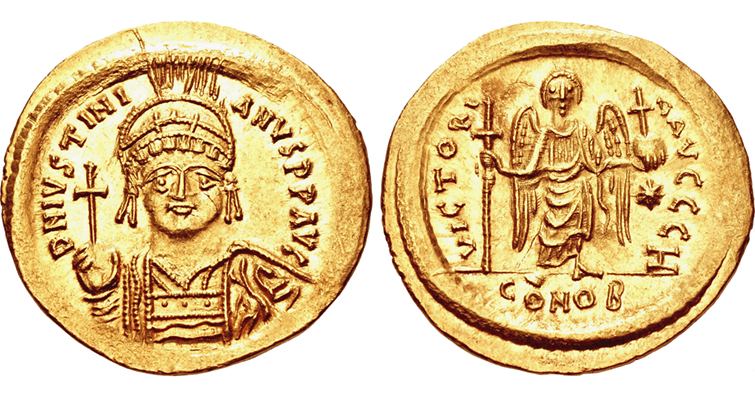 On this solidus the renowned emperor Justinian I (527 to 565) shows himself holding a globus cruciger and a shield. On the reverse he depicts a standing angel. 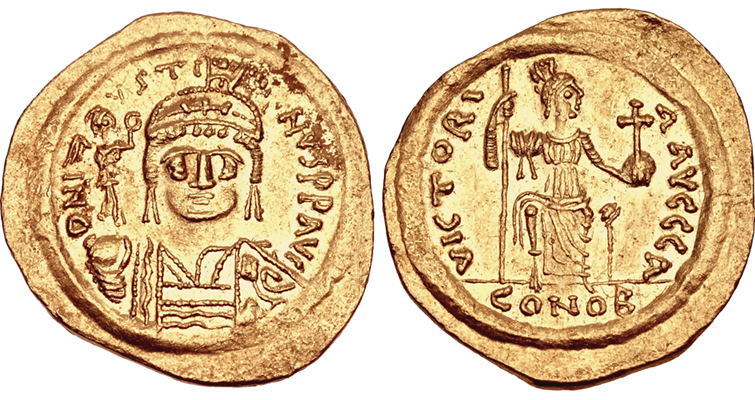 Justin II (565 to 578) is crowned by Victory, who stands upon a globe that the emperor holds. The reverse shows the personification of the city of Constantinople. 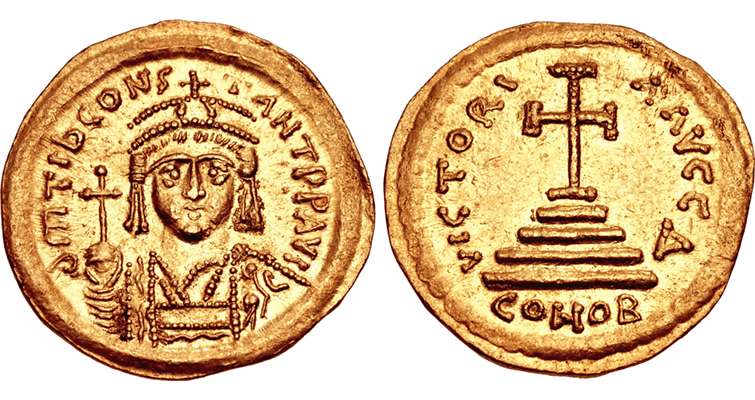 Tiberius II Constantine (578 to 582) chose as his reverse type a cross-potent on four steps. It likely represents the cross that more than 150 years earlier had been erected on Golgotha.

Among the most affordable of all “ancient” gold coins are issues of the Byzantine Empire, the successor nation of the Roman Empire. Its emperors ruled over the Eastern half of the Roman world for about a millennium after the European territories had fallen into Barbarian hands late in the fifth century A.D.

Perhaps the best opportunities for a collector is the solidus, the largest regular-issue Byzantine gold coin, which weighed about 4.45 grams. Among the most available of these are solidi of the first 10 Byzantine emperors, who ruled collectively from 491 to 685. We’ll cover their main issues in a two-part series — the first five here and the last five in a second installment.

Though there are many rare types of Byzantine solidi, often issued at branch mints, in this series we’ll focus on the main types that most collectors are likely to encounter.

The first Byzantine coin issuer, Anastasius, was a reformer by nature.

He went to great effort in A.D. 498 to modernize the copper coinage by introducing larger coins than previous issues, yet he did nothing to update the gold coinage, which seemingly required no attention. Except for the use of his own name in the obverse inscription, there is no meaningful difference between Anastasius’ solidi and those of his predecessor, Zeno (474 to 491).

Anastasius’ solidi show on their obverse a stereotyped bust of the emperor, three-quarters facing. His image is accompanied by a Latin inscription that bears his name and the abbreviations DN, PF and AVG, proclaiming the issuer to be “our lord” (dominus noster), “happy and dutiful” (pius, felix) and “emperor” (augustus). The emperor is shown in military attire, resting a spear over his shoulder, holding a decorated shield and wearing armored breastplate (a cuirass). Tied around his plumed helmet is a pearl diadem, signifying his status as emperor.

The reverse shows the standing figure of Victory, who had been derived from the Greek goddess Nike. Though she still symbolized victory, by this time the Byzantine Empire was a thoroughly Christian state, and she had been demoted from a goddess to merely a personification. Initially she is shown holding a heavy “voided” cross (as on the predecessor issues of Zeno), but later in Anastasius’ reign she holds a slender cross, surmounted by a Chi-Rho or a P-Cross.

The earliest solidi of the next Byzantine emperor, Justin I, a rustic soldier who had risen through the ranks, were patterned after those of Anastasius. They show the three-quarters facing military bust of the emperor and the standing figure of Victory holding a long cross surmounted by a P-Cross.

At some point in Justin’s reign, however, the reverse design changed: the female figure of Victory shown in partial profile was replaced by the full-facing figure of an angel who sometimes is thought to represent Saint Michael. He holds in his right hand a long cross and in his left a globe surmounted by a cross, an emblem commonly known as a globus cruciger or orb cruciger.

At the end of Justin’s life he briefly shared authority with his nephew and longtime advisor Justinian I, a man who ranks among the great figures of world history. After a brief transitional issue that showed the co-emperors enthroned and a standing angel, Justinian began to issue solidi in his own name.

Justinian’s first issue carries over the designs of his uncle, save for the use of his own name in the obverse inscription. They appear to have been issued until 539, at which point Justinian introduced a new imperial portrait type in which the military bust of the emperor is shown full-facing. Justinian still wears a cuirass, helmet and diadem, and holds a shield, but instead of resting a spear on his shoulder he holds aloft a globus cruciger.

Justinian continued to use Justin’s old reverse type of a standing angel throughout his long reign. Occasionally a piece is seen on which the angel holds a globe rather than a globus cruciger or holds a long cross that terminates in a P-cross design.

With the death of the childless Justinian, power passed to his nephew Justin II, who made notable design changes to the empire’s solidi. He used the same facing bust that had been introduced by his uncle except that Justin preferred to show himself being crowned by a Victory that stands upon on the globe in place of a cross.

Of even greater interest is his introduction of a new reverse type. The novel design of Justin shows the figure of Constantinopolis, the personification of the capital city of Constantinople, who is shown enthroned, holding a globus cruciger and a spear or a scepter. This city had been “founded” in 330 on the old Greek city of Byzantium, from which the term for the Byzantine Empire is derived.

Design innovation continued under the next emperor, Tiberius II Constantine.

He discards the traditional plumed helmet of his predecessors and instead depicts himself wearing a crown topped with a cross. He otherwise maintains the armor and shield of the usual bust type, and harkens back to Justinian I’s choice of holding a globus cruciger.

The greatest change under Tiberius II, however, occurred on the reverse. Instead of the standing figure of Victory or an angel, this emperor depicts a cross-potent set upon a pyramid-like base of four steps. It is thought to represent the jeweled cross that more than 150 years before, in 420 or 421, had been erected on Golgotha by the Eastern Roman Emperor Theodosius II (402 to 450), who on his own solidi appears to have celebrated his imperial gift to Jerusalem. 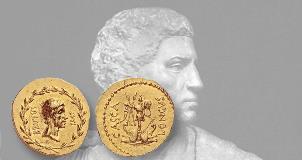