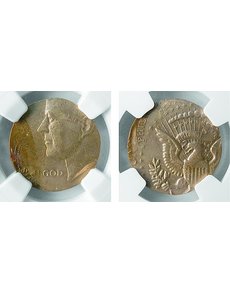 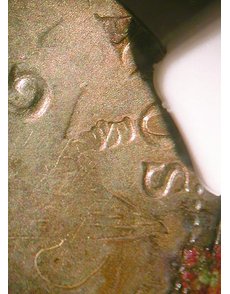 A close-up image of the reverse side of the host coin shows the smoking volcano and part of the word centavos. 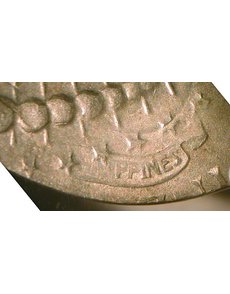 A close-up image illustrates the ribbon, carrying the word philippines, beneath the national shield. 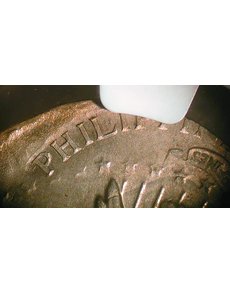 A close-up image depicts the philippines from the obverse legend that circles the national shield.

Among the most enduringly popular striking errors is the double-denomination error. Such errors occur when a coin of one denomination is struck a second time with the design of another denomination. Familiar examples include a cent struck on a dime and a 5-cent coin struck on a cent.

Far more exotic combinations certainly have occurred at the U.S. Mint facilities. Dual country, double-denomination errors comprise a small but distinguished subset. They are an inevitable consequence of the U.S. Mint’s long involvement in striking coins for other countries.

I recently came across a very peculiar example of such an error on the auction site eBay. It consists of a Kennedy half dollar design struck over a 30 percent off-center Philippine 10-centavo coin. Quite of bit of the host coin’s design is preserved.

This example was part of a consignment of Philippine coins offered by The Private Collector Group, an outfit that also features continuous auctions of coins and other collectibles on its Web site, www.thecollectorgroup.com.

When I spied the coin in its Numismatic Guaranty Corp. slab, I quickly determined that the label was not quite accurate. While NGC correctly identified the country, denomination and the error affecting the host coin, the date the grading firm assigned to it (1988) was wildly inaccurate. A little bit of research would have shown that the design of the host coin was last used in 1966. A little more research would have revealed that the U.S. Mint last struck this design on behalf of the Philippines in 1963. Finally, this denomination underwent a name change in 1967, rechristened as the 10 sentimos.

The reverse face of the host coin features the allegorical figure of liberty standing to the left of a smoking volcano, Mount Mayon. Above her head is the denomination spelled out — ten centavos. The date appears at the bottom of the design.

The date of the host coin crosses Kennedy’s cheek bone and nose. The first two digits are clear, while the last two digits are quite faint. A careful examination under a microscope did reveal the date to be 1963. This probably means that the half dollar design was struck in 1964.

One could be forgiven in thinking that this is some kind of assisted error. After all, it seems inconceivable that an error coin from the previous year could make its way to a half dollar press unassisted. However, there is at least one scenario that makes this event not only possible, but quite reasonable.

Undersized, oversized and misshapen error coins are often intercepted by a riddler, a screening device that leaves oversized coins above a screen with holes that admit coins of normal diameter. A second screen with holes too small for a normal coin filters out undersized error coins. Coins separated in this fashion are automatically routed to a container that contains an accumulation of error coins.

When the container becomes full, its contents must be transported to a furnace for melting — a job done in-house during the time period in which this coin would have been struck. Until the late 1990s, all manner of material was moved around the Mint in all-purpose tote bins. This includes blanks, planchets, normal coins, error coins and waste material like chopped-up strip.

It is entirely possible that this off-center Philippine 10-centavo coin remained behind when the contents of a tote bin were emptied. It was then presumably buried under a subsequent load of half dollar planchets.

This is not the only double-denomination error involving an abnormal host coin. Indirect evidence of such a coin can be found at http://kennedyhalfdollar.com/, a site constructed by Ken Glickman, called The Home of the Kennedy Half Dollar.

One page features a 1981 Kennedy half dollar that has on its obverse face a full brockage of the reverse design of an error quarter dollar.

From the looks of it, the coin that generated the incuse, mirror-image impression was a quarter dollar struck slightly off-center on a 5-cent planchet. Glickman found his coin in a roll obtained from his local bank, so there’s no doubt in my mind that it resulted from an accidental event. The scenario I proposed for the half dollar/10-centavo coin error would be equally applicable to Glickman’s error.