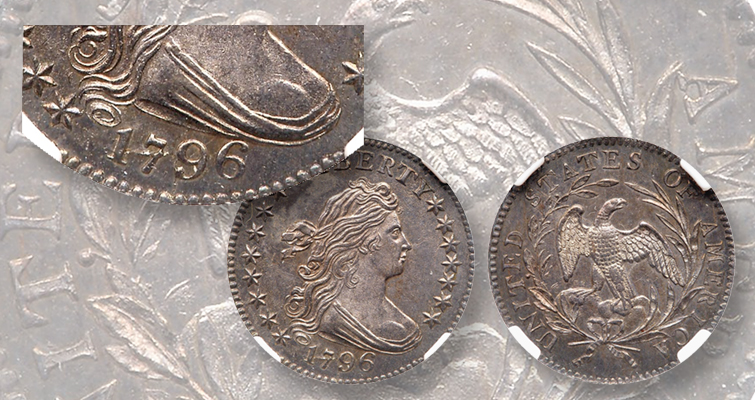 A JR-6 1796 Draped Bust, Small Eagle dime graded AU-50 is a solid example of this desirable two-year type. It will be offered at the Goldbergs’ June Pre-Long Beach auction. The variety’s distinctive “hyphenated date” can be seen in the enlargement. 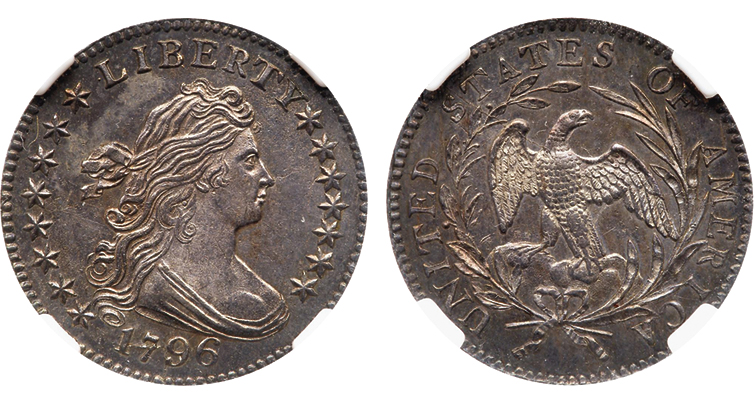 The Draped Bust, Small Eagle type was struck at the Philadelphia Mint in 1796 and 1797, making it a distinct two-year type in the dime series. Shown is an example of the JR-6 variety for 1796, called the “hyphenated date” variety because of a heavy die crack between the 17 that extends to the 9 in the date. 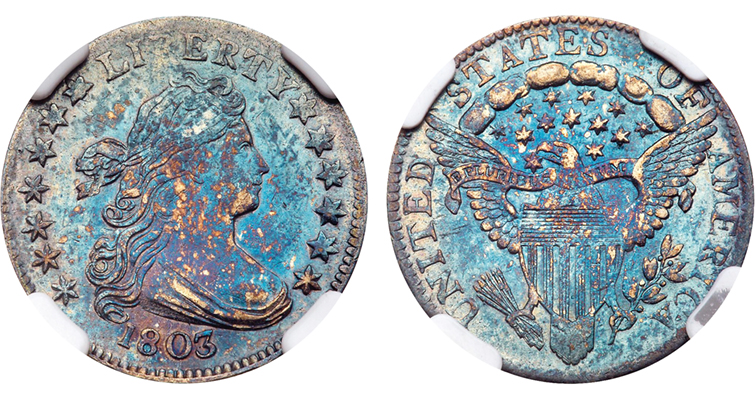 This MS-61 1803 Draped Bust dime is one of only a few known Mint State examples of the date and is certainly the bluest coin at the auction. 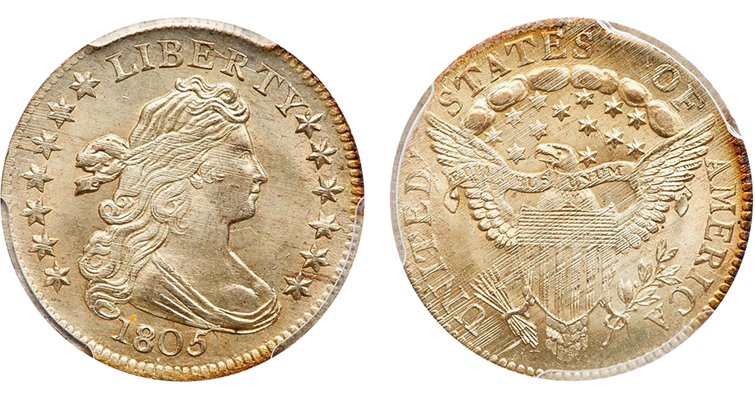 Planchet striations described as adjustment marks are seen on both sides of this 1805 Draped Bust, Heraldic Eagle, 4 Berries dime graded PCGS MS-66. These lines were present on the planchet when the dime was struck at the Philadelphia Mint and are not to be confused with post-Mint damage. 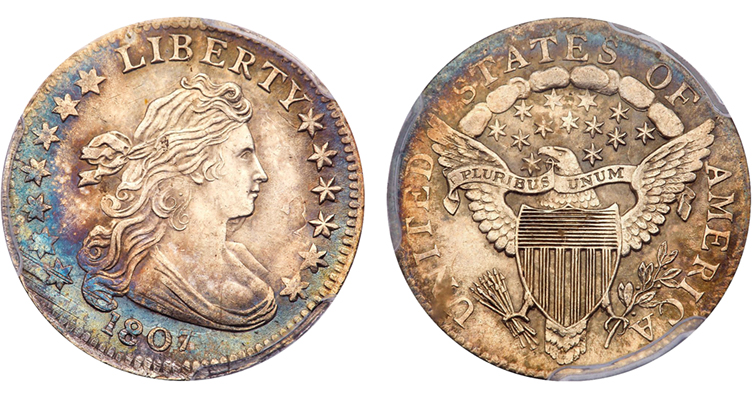 A selection of early Draped Bust dimes is among the highlights at the June 10 to 13 Pre-Long Beach Auctions in Los Angeles by Ira and Larry Goldberg Auctioneers.

The dime denomination was introduced in 1796 and the auction features an example of this first year graded Mint State 64 by Numismatic Guaranty Corp.

Early dimes from 1796 through 1837 are collected by JR varieties, a tribute to engraver John Reich who created the Capped Bust Liberty design that was first used on the denomination in 1809. The 1796 Draped Bust, Small Eagle dime on offer is an example of the JR-6 variety, called the “hyphenated date” variety because of a heavy die crack between the 17 that extends to the 9 in the date.

The Draped Bust, Small Eagle type was struck at the Philadelphia Mint in 1796 and 1797, making it a distinct two-year type in the dime series. While some examples were saved at the time of issue as a novelty, especially since the lower denomination made it a (relatively) inexpensive keepsake, examples in higher grades without problems are infrequently encountered. The offered example is estimated at $40,000 to $50,000.

The early dimes remain a collecting area that is ripe for discovery. For example, the 1796 JR-7 variety was first identified in 2002 and a second example turned up in 2016. As the Goldbergs reminded bidders, “Draped Bust dimes are one of the toughest series to collect. Nice examples of most dates are quite sparse, and assembling a high grade collection takes considerable patience.”

The reverse design of the dime switched to the Heraldic Eagle type in 1798, and this reverse continued to be paired with the Draped Bust obverse until 1807.

A JR-3 1803 Draped Bust dime graded NGC MS-61 is a rare Uncirculated survivor estimated to sell in excess of $40,000. The offered dime has incredibly vibrant lapis lazuli blue color. The description explains, “This is an extraordinary coin as there are no more than four or five 1803 dimes that can claim Mint State condition.”

While some striking weakness is noted at the top of the obverse by the B in LIBERTY and at the corresponding area on the reverse at the eagle’s tail, the strike is otherwise bold. The issue is well known as being poorly struck, generally resulting in weak details in the eagle’s breast feathers.

An 1805 Draped Bust dime graded PCGS MS-66 is another standout, estimated to sell for more than $50,000. Two distinct Heraldic Eagle reverse subtypes were used on dimes this year — one with four berries on the olive branch, of which this is an example, and one with five berries. The catalog notes that both sides feature light adjustment marks as made, although they may not be traditional adjustment marks that were used to remove metal to regulate the weight of planchet within a set standard (a Draped Bust dime should weigh 2.7 grams).

Rather, these parallel lines may be the result of striations from the rolling mills that were transferred to the strip from which planchets were cut. The marred strip resulted in lines in the planchets that survived striking to be seen on the coins.

The description notes that the dime is frosty and white, with just a hint of toning, summarizing, “A wonderful type coin that offers a bold strike, super clean surfaces and glowing mint luster. The fields are amazing, they are virtually untouched by contact with other coins.”

Another high-grade survivor is an 1807 Draped Bust dime, JR-1, graded PCGS MS-65, with an estimate of $25,000 to $30,000. Since it is a common variety, it is well suited for a collector’s type set, with a bold strike and “elegant light gold toning in areas, with much deeper blue and russet accents around the rims.”

For those looking to learn more about early dimes, the 1984 book Early United States Dimes 1796–1837, authored by the John Reich Collectors Society, remains essential, and a useful recent text in the field is the Bust Dime Variety Identification Guide by Winston Zack, Louis Scuderi and Michael Sherrill. Coin World columnist Brad Karoleff is president of the JRCS and editor of its John Reich Journal, which publishes extensive information on various early issues of the Philadelphia Mint. 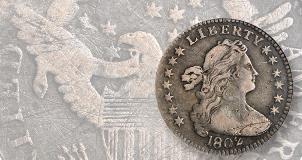 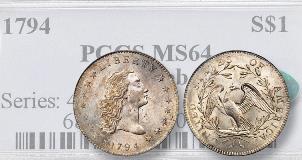 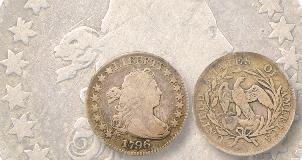