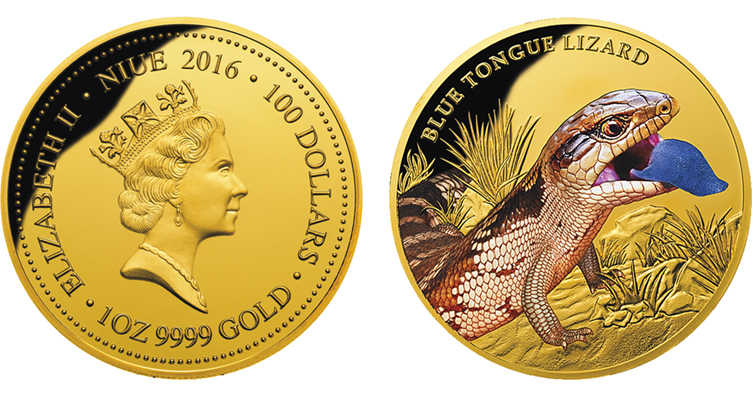 The blue tongued lizard is the third animal in Downies’ Remarkable Reptiles coin series. The 2016 gold $100 coin for Niue is being released in October of 2015.

Sales of a Proof 2016 Remarkable Reptiles .9999 fine gold $100 version of the coin began on Sept. 7, with delivery of the coins to begin in mid-October.

The coins are being struck to order, and have a maximum mintage of 150 pieces, making them one of the lowest mintage modern gold coins.

The 1-ounce coins feature the honored animal on the reverse. The skin, eyes and, yes, tongue of the blue tongued lizard appear in color. The Raphael Maklouf effigy of Queen Elizabeth II appears on the obverse.

The first reptile in the series was the frilled neck lizard (2014); the second issue honors the thorny devil lizard (2015). Companion silver coins, with higher mintages, have also been issued.

The $100 blue tongued lizard coin is struck by PAMP (Produits Artistiques Metaux Precieux) and edge numbered with the number matching the certificate of authenticity.

Pricing for the Blue Tongued Lizard coin will be released at the time of issue.

For more information about the coin, or to order, visit the firm’s website, www.downies.com.