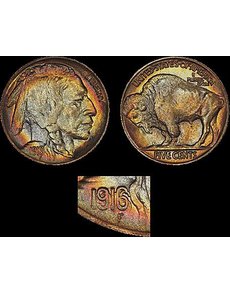 The 1916 Indian Head, Doubled Die Obverse 5-cent coin was the result of two hubbing impressions from a working hub. 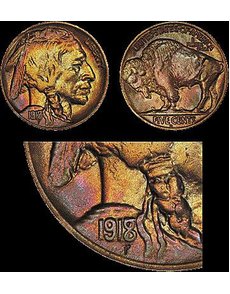 In the Indian Head 5-cent series, the 1918/7-D variety is a key coin to completing the series. The Gerald Forsythe duplicate example shown is graded PCGS Secure Mint State 64 and stickered by CAC.

Collector Gerald Forsythe possesses an affinity for the finest, and that goes for his numismatic holdings as well.

A businessman and entrepreneur with extensive interests in manufacturing, cattle ranching, farming and auto racing, Forsythe owns, or has owned, some of the finest collections of early 20th century U.S. coins ever assembled, among other series, according to auction firm Legend-Morphy.

Among Forsythe’s numismatic interests are Winged Liberty Head dimes and Indian Head 5-cent coins, duplicates of which will be offered at auction July 18 in Las Vegas, Nev., by Legend-Morphy along with other consignments.

The coins are being offered in Legend-Morphy’s Regency Auction IV set at the Bellagio, 3600 S. Las Vegas Blvd., in conjunction with the Professional Coin Grading Service Members Only Show.

Both coins are certified by Professional Coin Grading Service as Secure Mint State 64, and both are stickered by Certified Acceptance Corp.

The 1916 Indian Head, Doubled Die Obverse 5-cent coin did not become publicly known as a major variety until Pomona, Calif., collector Herbert S. Perlin submitted photographic evidence that was published on Page 1895 of the July 1962 issue of Numismatic Scrapbook.

Accompanying a close-up image of the date area was the following narrative, with speculation that was later disproved:

“This coin has 1916 over 1916. The position of the two dates precludes the possibility of a metal run due to an out-of-level die. Then, too, there is no evidence of doubling on other portions of the coin therefore ruling out a doubled die created during the hubbing process.

“This leaves the alternate explanation of the date turning out weak and to save the die the date was recut by hand.”

However, researchers now accept that the 1916 is a doubled die variety, the result of two impressions from a working hub. The result is overlapping date digits — digits incomplete at the bottom, from a first impression of a working hub, well southeast of the prominent second impression.

According to the Fifth Edition, Volume I of the Cherrypickers’ Guide to Rare Die Varieties of United States Coins by Bill Fivaz and J.T. Stanton, “the date, chin, throat, feathers and the tie on the braids are all doubled” on the 1916 Doubled Die Obverse 5-cent piece. “The date is doubled to the southeast, with the top two-thirds of the 16 quite strong.”

In the second edition of the reference The Complete Guide to Buffalo Nickels, published in 2000, author David W. Lange, writes, “Not until it was described and illustrated in the September 1976 issue of the Coin Dealer Newsletter Monthly Summary did this coin gain proper recognition. It appeared shortly thereafter in the Red Book, and it’s been a perennial favorite ever since.”

According to Lange, dateless examples may be identified by the extra thickness of the Indian’s hair ribbon, but such pieces would be worth significantly less than those with distinct definition of the date.

The 1918/7-D coin is also a doubled die variety. The overdate was created by a hubbing error occurring late in 1917, when 1917-
dated dies were still in use and dies for the calendar year 1918 were placed into production.

Lange writes: “In sinking a working die, two or more impressions had to be taken from a working hub. Between each impression, the developing die was taken to the furnace to be annealed, or softened, since the first impression caused the metal to become workhardened. It was then ready for another impression.

“Amid the haste to produce new dies, a working die that had already been impressed with a hub dated 1917 was then either inadvertently or intentionally given another impression from a hub dated 1918,” Lange adds. “The result was an overdate.”

The overdate went largely unnoticed until the late 1930s.

Lange reports the appearance of the overdate in a March 15, 1930, auction held by dealer Paul Lange of The Hobby Shop.

The 1918/7-D overdate, according to the Cherrypickers’ Guide, appears “with the top of the 8 extending halfway up into the horizontal bar of the 7. The two ‘ears’ of the 7 show clearly, as well as the flat top surface of the 7. The diagonal of the 7 is straight, not curved, and appears on the right portion of the upper loop and the left half of the lower loop.”

“Look for the small die crack immediately above the tie on the braid, leading slightly downward to the Indian’s jaw. The beginning of this die break can usually be seen even on lower grade coins.”