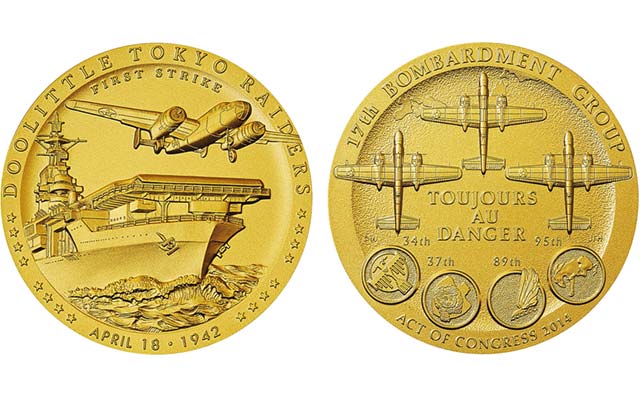 The congressional gold medal recognizing the Doolittle Tokyo Raiders was formally presented April 15, in Emancipation Hall in the Capitol Visitor Center. The final two surviving Raiders of the 80 who participated in the April 18, 1942, raid are expected to attend when the medal reaches its destination at the National Museum of the U.S. Air Force in Dayton, Ohio, on April 18.

In his videotaped message, Cole said "on behalf of the 78 fallen Raiders who we proudly served with on that famous raid, we are honored to accept this prestigious award."

House Speaker John Boehner (R-Ohio), who was scheduled to preside over the event, was unable to attend because of a death in the family.

Cole and Thatcher are, however, scheduled to attend an April 18 ceremony in Dayton, Ohio, during which the gold medal is to be formally presented to the museum for permanent display. The two are also scheduled to raise silver goblets to toast two fellow Raiders who passed away earlier this year.

As a second lieutenant, Cole was the co-pilot for Crew No. 1 piloted by Lt. Col. James H. “Jimmy” Doolittle. Thatcher was the engineer-gunner for Crew No. 7.

In total, 80 Raiders in five-man crews  boarded 16 medium-range North American B-25B Mitchell bombers and left the flight deck of the aircraft carrier USS Hornet on April 18, 1942, to bomb Japan’s capital and select other cities in an effort to end the war early in the South Pacific. Of the 80 Raiders that left the Hornet’s flight deck, eight were captured, two died in crashes, and 70 returned home.

Another Raider, Lt. Col. Edward Saylor, who was alive to see passage of the medal’s authorizing legislation, passed away Jan. 28, 2015, at age 94. Saylor was the engineer for Crew 15.

Brian Anderson, the sergeant at arms for the Doolittle Tokyo Raiders who spearheaded passage of the legislation authorizing the congressional gold medal, said the Mint’s Artistic Infusion Program artists and Mint’s engraving staff “hit the nail on the head with these designs.”

“They are just the way we wanted it and what I was fighting for,” Anderson said. “I think it is one of the best congressional gold medals I have seen for telling the story.”

The Commission of Fine Arts recommended the eventual approved designs at their Oct. 16, 2014, meeting.

At its Oct. 14, 2014, meeting, the Citizens Coinage Advisory Committee recommended different obverse and reverse designs. The CCAC’s recommendations show three bombers leaving the Hornet’s flight deck on the obverse. For the reverse, the CCAC recommended a design of four bombers flying over an outline of Tokyo.

The gold medal is scheduled to be flown April 18 in a B-25 bomber from Andrews Air Force Base in Washington, D.C., to Wright-Patterson Air Force Base, in Dayton, Ohio, for the medal to be formally presented for permanent display at the National Museum of the U.S. Air Force.

The United States Mint will also offer for sale to the public 3-inch and 1.5-inch bronze versions of the gold medal for $39.95 and $6.95, respectively.