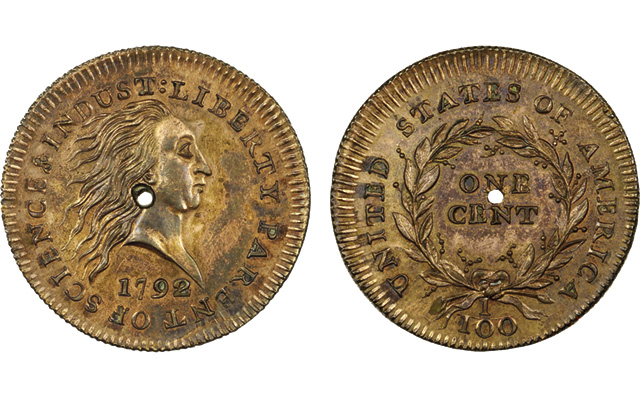 A 1792 Silver Center cent — missing the silver center — is unique and was struck without a plug in the center, resulting in a hole. The circumstances behind its production are mysterious and Heritage’s provenance notes that it was originally discovered in a piece of furniture in a Philadelphia estate. 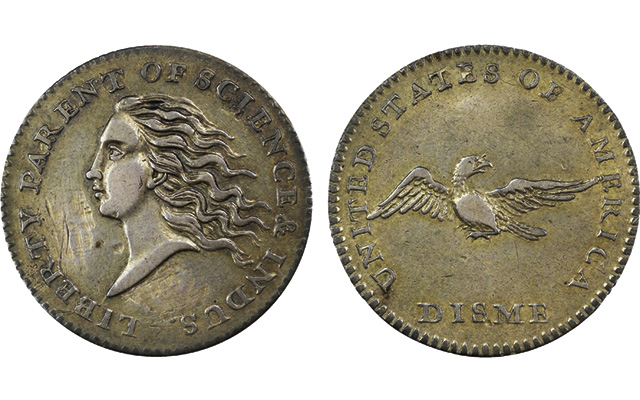 A 1792 silver disme on a unique thick flan has a long and rich ownership history that traces to 1867 when it brought just $39 at auction.

The offering of 1792 pattern coins in the Donald G. Partrick Collection being sold at the Florida United Numismatists show in Orlando on Jan. 8 is unparalleled and Heritage writes, “Most other collections of 1792s are defined by what is included — perhaps a silver half disme, a copper disme, or a low grade cent. The Partrick collection, unlike any other, is better defined by what is not included.”

Partrick aimed for completion by varieties listed in J. Hewitt Judd’s United States Pattern Coins book and just three pieces are missing, resulting in what Heritage writes is “the ultimate date set of United States coinage.” The firm adds that with just two exceptions, every piece in Partrick’s 1792 pattern collection is the finest available to collectors.

The set starts with a 1792 Silver Center cent, Judd 1, graded Extremely Fine 45+ by Numismatic Guaranty Corp. with a green Certified Acceptance Corp. sticker indicating quality within the grade. Partrick purchased this coin for $9,400 on May 15, 1968, from Bernard Gimelson, who shared at the time that this example was found by a contractor from Doylestown, Pa., during a building renovation, nestled in a jar hidden behind a wall.

The next lot is unique: a 1792 Silver Center cent, Judd 1a, missing the silver plug in the center. It is graded Mint State 62 red and brown and the absent center is revealed by way of a hole in the center of the coin.

Heritage uses this to present an enticing invitation to researchers, noting, “The first Mint of the United States still has secrets to reveal, even two hundred years after its founding.”

The unique “Sans Silver” example came to light in 1993 and Heritage writes that it may have been a trial striking before making the Silver Center pieces. Partrick purchased it from a March 1995 Stack’s auction. P. Scott Rubin’s text America’s Copper Coinage, 1783-1857 mentions Thomas Elder’s sale of October 1926, lot 1435, where a piece is described as, “1792. Pattern for Silver Centre Cent (freak)” and Heritage writes that this may represent an earlier appearance of this coin.

Another unique example in the Partrick collection is a 1792 silver disme, Judd 9a, that is unique on a thick silver planchet (or flan). While coins struck on double-thick planchets (sometimes called piedforts) are traditionally associated with presentation pieces, Heritage writes that in this case, “they more likely represent a coinage experiment within the early Mint.”

This example, graded Extremely Fine Details, Scratches, has a long and rich ownership history that begins with W. Elliot Woodward’s October 1867 sale of the Joseph J. Mickley Collection where it sold for $39. It sold in an Edward Cogan auction in 1875 for $20. Multiple auction appearances followed with it selling for $33.50 at a 1902 auction and $280 at a 1909 auction. It passed through the collections of E.H.R. Green, Eric P. Newman and Burdette G. Johnson and was later offered by Celina Coin Co. in a November 1946 advertisement in The Numismatist for $750. It fared more modestly when offered at a 1952 Hans Schulman auction where it brought just $300. It was purchased by the Norweb family from the New Netherlands Coin Co. on Jan. 31, 1958, and when offered at Bowers and Merena Auction’s November 1988 auction of that collection, Partrick purchased it for $28,600.

Heritage writes that while the obverse is well-struck, the 1792 date (which would normally appear under Liberty’s bust) has been effaced and there are tooling marks in the left obverse field.