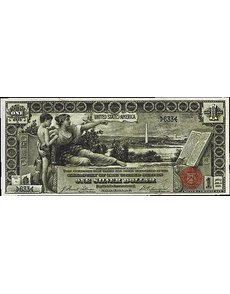 The Heritage Currency Auctions sale in Long Beach will have no shortage of rarities that span the globe in several thousand individual lots.
Large-size notes alone account for 1,285 lots, with a little more than 1,000 lots devoted to small-size notes. More than half of the notes in the large-size section are graded Extremely Fine or lower, with the vast majority (419) in Very Fine condition.
Among the many examples are the popular Series 1896 $1 silver certificates, from the Educational Series, Friedberg 224 and F-225 (Paper Money of the United States by Arthur L. and Ira S. Friedberg).
Twenty-five such examples are in the sale, ranging in grade from Very Fine 20 all the way to Gem Uncirculated 66, and with pricing starting at less than $200 up to more than 15 times that. The expectation that most if not all of these will sell is indicative of a reservoir of buyers at the ready.
Meanwhile, results of the massive American Numismatic Association World’s Fair of Money auctions are still reverberating throughout the hobby.
The official ANA auction, conducted by Stack’s Bowers Galleries, included nine lots that brought six-figure sums. The truism that United States large-size currency dominates the market is evidenced by the fact that seven of these nine lots were in the large-size category.
If any proof is needed that collectors should collect for the long haul and not focus on short-term profits, a few good examples were included in the auction, notably among the silver certificates from the Dr. Edward and Joanne Dauer Collection.
One of those notes was a Series 1880 $100 silver certificate (F-340), graded Extremely Fine 45 by PCGS Currency, that reached a bid of $352,500. When last publicly sold in 2001, it realized $44,000.
Another Series 1880 $100 silver certificate from the Dauer Collection, but with a slightly different design (F-341), brought $129,250 in Paper Money Guaranty Extremely Fine 40.
A Series 1891 $100 silver certificate (F-344), graded About Uncirculated 50 by PMG, fetched $176,250, after the same example sold in 2000 for $37,400 with the much higher grade of Uncirculated 64.
Finally, a Series 1863 $100 compound interest Treasury note (F-193), graded by PCGS Currency as Very Fine 25 Apparent, with minor restorations, realized $176,250 versus the $74,750 realized by the same example in 2006.
Among small-size notes, the secret to a high price remains high face value or a very low (or fancy) serial number.
For instance, a Series 1934 $500 Federal Reserve star note printed for the Federal Reserve Bank of Kansas City (F-2201-J*), in Choice New 63 Premium Paper Quality by PCGS Currency, with serial number 1, sold for $176,250.