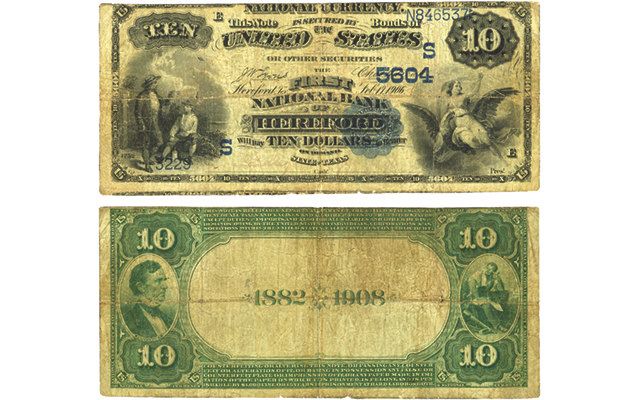 This Series 1882 $10 note issued for the First national Bank of Hereford (Texas) has a previously unknown signature combination. The note sold Aug. 7 during the Stack's Bowers Galleries currency auction at the ANA World's Fair of Money.

The Aug. 7 sale of a newly discovered national bank note affords the opportunity to discuss national notes with a different perspective than usual.

The Series 1882 Date Back $10 note from the First National Bank of Hereford, Texas, sold for $35,250 (including the buyer’s fee) at the Stack’s Bowers Galleries currency auction conducted during the American Numismatic Association World’s Fair of Money in Rosemont, Ill.

The discovery note, with the previously unknown signature combination of Judson W. Lyons and Charles H. Treat, illustrates the different audiences to which nationals may appeal and the different ways they may be collected.

The note has been assigned Friedberg number 545a in the next edition of our Paper Money of the United States, written by me and my brother, Ira S. Friedberg.

Established by Abraham Lincoln early in 1863, national bank notes are among the oldest forms of federal paper currency. During the national banking period (from the Civil War to the 1930s), 12,635 banks from every state plus U.S. territories issued notes.

Notes such as this one are extremely rare in their own right, regardless of the issuing state or bank. Dozens of large-size national bank notes with certain signature combinations have populations of five or fewer known.

Since a signature combination requires a unique “Friedberg number,” these notes can attract prices the equivalent of the rarest large-size type notes, which is what they essentially are.

Collectible denominations range from $1 to $100 within nine separate issues (seven large-size and two small-size), resulting in more than 500 Friedberg numbers. But that is only part of the story:

Most likely, a collector chooses a subject of interest. For example, notes with low bank serial numbers are not as rare as you would expect and are quite easy to find at reasonable premiums.

Circumstances arise where we often see the supply outstripping the demand and surprisingly low prices in proportion to a note’s relative rarity. This is a boon for specialized collectors, who can collect by county, by city, and even by specific bank.

Thanks to the census tools pioneered by Martin Gengerke and Don Kelly, it is not unusual to come across items at reasonable cost, of which very few are known. It is even possible to “discover” a note previously unnoticed and not pay a lot to do so.