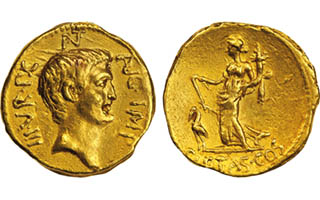 A circa early 41 B.C. gold aureus of Marc Antony as Triumvir realized $141,000 including 17.5 percent buyer’s fee, during Heritage Auctions’ Chicago International Coin Fair auction April 10 to 12. The coin was formerly in the Andre Constantine Dimitriadis Collection. 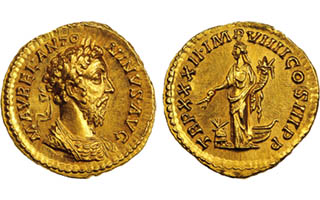 A circa A.D. 177 to 178 gold aureus of Marcus Aurelius, realized $52,875, including buyer’s fee, during Heritage Auctions’ CICF auction. The coin was formerly in the Andre Constantine Dimitriadis Collection.

The coin was struck by a mint traveling with Marc Antony in Asia, possibly in Ephesus, and carries what experts consider a “refined portrait” for those conditions. If the coin was struck in Ephesus (which would have occurred before Antony met Cleopatra), its quality could be explained by the presence of Greek artists there, according to Heritage.

The virtue Pietas appears on the reverse, and is likely a reference to Mark Antony's brother, Lucius Antony, who bore the cognomen (third name) Pietas. Lucius was entering into his first consulship in 41 B.C. and would soon team up with Marc Antony's ferocious wife, Fulvia, to initiate a civil war against his erstwhile Triumviral partner, Octavian.

The stork pictured at the feet of the goddess is also a symbol of familial piety and was no doubt intended to express hopes for a successful term of office for Lucius.

The coin is “one of the finest examples extant” and is graded Extremely Fine, strike 5/5, surface 3/5, by Numismatic Guaranty Corp.

Another highlight of the collection is the circa A.D. 177 to 178 gold aureus of Marcus Aurelius.

Graded Mint State ? by NGC, strike 5/5, surface 4/5, Fine Style, Heritage calls the coin “an exquisite and virtually flawless piece, with a superb portrait of the aged emperor in full armor.”

Aurelius, the “Philosopher Emperor,” wears a detailed military bust with armor and curiass and the officer's cloak, or paludamentum, on the obverse, illustrating the duality of his reign. Despite being a man of peace devoted to Stoic philosophy, Aurelius was forced to wage war for 17 years against the Roman Empire’s enemies.

The reverse shows Annona, personification of the harvest, standing next to a docked grain ship, upon which the Roman masses depended for their daily bread.

The portion of the collection offered in the auction included more than 215 Roman gold coins spanning the history of the Roman Empire from 50 B.C. to A.D. 500, as part of Heritage’s largest-ever offering of ancient coins at auction.

NGC graded all of the Roman gold aurei and solidi from the Dimitriadis Collection in the CICF auction, including several finest known examples, according to NGC and Heritage.

The collection was assembled over nearly 30 years, beginning in 1984 and continuing until Dimitriadis’ death in 2012. The collection includes what is “considered to be the most impressive assemblage of Roman gold coins to be sold in the United States in recent memory,” according to Heritage.

Many of the coins were purchased from the most important sales of the last two decades, including the collections of Nelson Bunker and William Herbert Hunt and others, and many of the coins are illustrated in The Roman Aurei by Xavier Calico.

According to David Vagi, director of NGC ancients, the Dimitriadis Collection included “a number of museum-quality specimens that are virtually never available in the marketplace.”

Some of the coins have pedigrees back to the 1880s, according to David Michaels, director of ancient coins for Heritage. Dimitriadis’ collection also included more than 100 Greek and Roman silver coins, which were sold during the CICF auction.

Dimitriadis, a Californian who was born in Istanbul to Greek parents, was founder of LTC Properties, a Westlake Village, Calif., real estate investment trust. He also collected Byzantine gold coins. Heritage has announced that it will auction some 600 of his Byzantine coins (including more than 500 gold coins) in New York City Sept. 17 to 19, 2014.