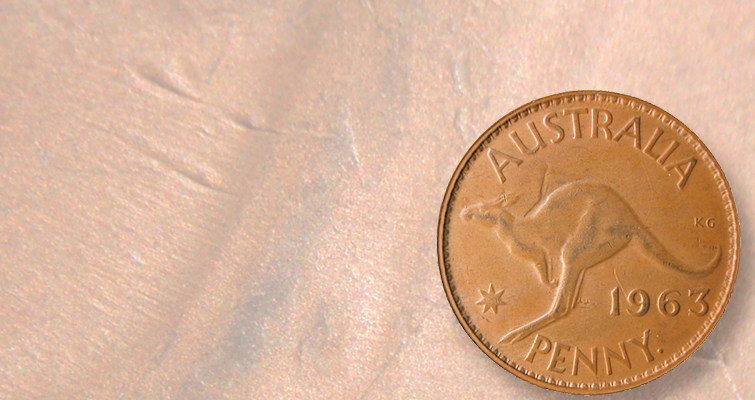 A close-up of the radically misaligned clash marks, which match the dentils and design rim of the anvil die. 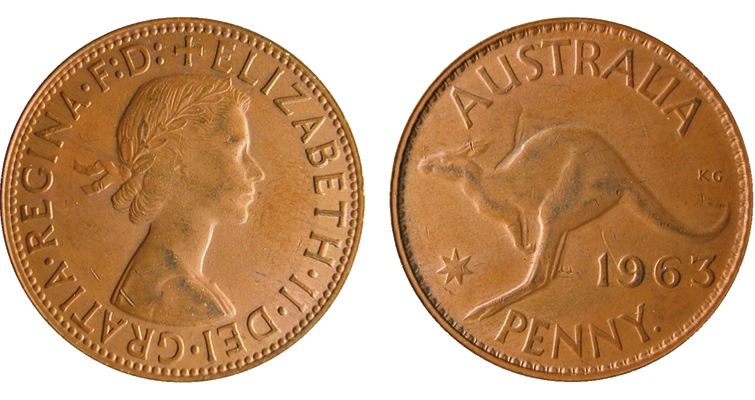 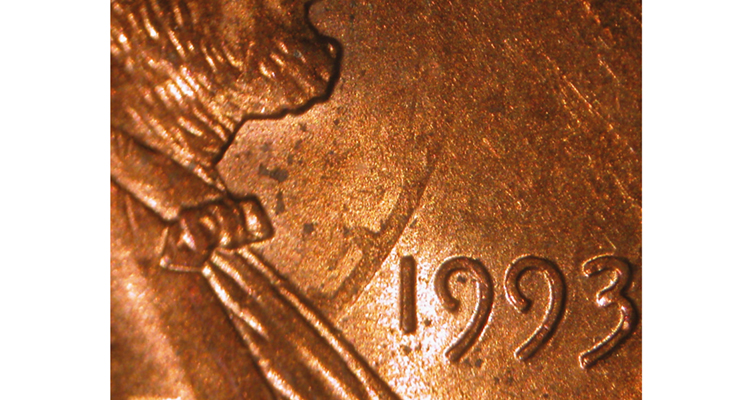 This 1993 Lincoln cent shows a weak, tilted, and horizontally misaligned clash mark on the obverse face. This is one of many radically misaligned die clashes known from cents struck in the period 1990 to 2000.

A die clash occurs when minimum die clearance drops to zero and the dies collide when a planchet fails to be fed into the striking chamber.

The term “radically misaligned die clash” (or “radical MAD clash”) has been used to describe an unusual type of die clash that combines several attributes. It is a moderately to very weak clash involving a hammer die that is tilted and horizontally misaligned to a remarkable degree (sometimes over 50 percent). A rotation or pivot of the die is also occasionally part of the mix (Collectors’ Clearinghouse, July 12, 2010).

Among modern issues, radical MAD clashes are restricted to Lincoln cents minted from 1990 to 2000. But in that period, a surprising number were produced. The website www.maddieclashes.com lists 34 unambiguous cases and 13 additional cases regarded as tentative because they couldn’t confidently be distinguished from curvilinear die dents. A 1993 Lincoln cent (MDC-1c-1993-02) illustrates this error type.

To find other domestic examples you have to go back to the 19th century. Rick Snow, in the April 2012 edition of Longacre’s Ledger (Vol. 22, No. 1), lists five Indian Head cents and one 2-cent piece with such errors.

Beyond our borders, the most productive source of radical MAD clashes has been Canada, which has given us five 1-cent coins minted between 1962 and 1963 and a single 5-cent coin produced in 1949 (Collectors’ Clearinghouse, Dec. 31, 2013).

Radical MAD clashes have always stood apart from conventional die clashes. The latter are usually well-centered, and any misalignments tend to be quite modest. Die tilt is rarely present and never significant.

It should be noted that a very large number of strongly tilted but relatively well-centered die clashes are known among 1960 and 1960-D Lincoln, Small Date cents. At the same time, very few conventional clashes are known from this date subtype. This mysterious pattern would seem to be unrelated to the radical MAD clashes of later years (Collectors’ Clearinghouse, Jan. 3, 2011).

Radical MAD clashes far outnumber coins actually struck by similarly positioned hammer dies. I know of only two domestic examples — a dime and a cent — struck in this fashion (Collectors’ Clearinghouse, Feb. 1, 2010, and Oct. 8, 2012). This numerical discrepancy has led to speculations that the clashes occurred before or during installation.

This notion has now been called into question by a newly recorded MAD clash in a 1963 Australia penny. The reverse face (struck by the hammer die) shows both a strong conventional die clash and a radical MAD clash. A far as I know, this is the first radical MAD clash from Australia.

A well-centered conventional die clash left the outline of Elizabeth II’s bust in the field on either side of the kangaroo. The MAD clash sits within her incuse neck.

I cannot determine if the MAD clash preceded or followed the conventional clash. But their co-occurrence suggests that both were the product of press malfunctions during a production run.

The anvil (obverse) die shows no clash marks, strongly suggesting that the die was switched-out before this coin was struck. The only other possibility is that the clash marks were intentionally abraded. However, this seems unlikely since there are no die scratches, no loss of low-lying design features, and no attenuation of letters.

In either case, it seems that damage to one die was attended to by mint workers while the other die was ignored.