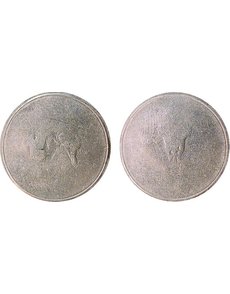 This weakly struck 2007 Montana quarter dollar was struck on a Schuler press, which usually doesn’t require adjustment strikes during setup. 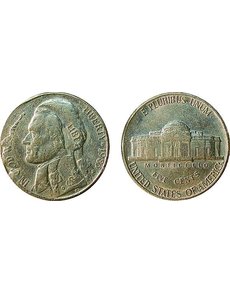 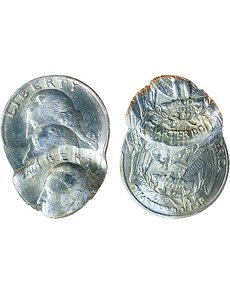 For many years the writers of this column have made a conscious decision to avoid the term “die adjustment strike” when referring to an exceedingly weak (low-pressure) strike. Synonyms include “die trial,” “test strike,” “trial strike” and “setup piece.” All of these terms assume that a profoundly weak strike represents a coin that was struck as the settings of the coinage press were adjusted.

Weak strikes arise from two proximate causes — inadequate ram pressure and insufficient die approximation (excessive minimum die clearance). Ram pressure is the tonnage applied to a planchet of normal thickness. Die clearance refers to the closest approach the dies make to each other in the absence of a planchet.

Determining proximate cause is often difficult; assigning ultimate cause is virtually impossible. A simple, centered weak strike could be a die adjustment strike or the product of spontaneous equipment malfunction. The latter category might encompass dies falling out of adjustment, a jam-up in the guts of the press, a mistimed or broken cam (upon which the anvil die rests), a mistimed hammer die, a slack or cracked press frame, a loose or broken knuckle joint, or a broken circuit breaker.

Numerous independent lines of evidence indicate that the vast majority of weak strikes in the marketplace are the product of spontaneous equipment malfunction, with most caused by an increase in minimum die clearance.

Absolute abundance: If weak strikes were the product of die adjustment, they should be very rare, as such test strikes are ordinarily consigned to the furnace. In truth, weak strikes are relatively common. They frequently pop up on the online auction site eBay, and the prices they command are commensurate with their ready availability. Most lower-denomination examples (cent to quarter dollar), cost $50 or less. Shown here is a recently purchased 2007 Montana quarter dollar that cost a mere $35.

Distribution by denomination: If most simple, centered weak strikes were die adjustment strikes, their relative abundance should be proportional to the total number of coins struck and dies used. Cents should therefore be the most common denomination affected by this error.

In my experience, however, the most commonly affected denomination is the dime, followed by the cent, quarter dollar and 5-cent coin. This is exactly the pattern you’d expect from weakness caused by spontaneous press malfunction resulting in insufficient die approximation. Dime planchets are quite thin, enforcing a narrow margin of error when setting the minimum die clearance. Only a slight increase in this safety margin will result in a weak strike. A slight decrease will result in a clash if a planchet is not positioned between the dies — an error that occurs on dimes with great frequency. A larger margin of error exists for thicker planchets.

This distribution pattern is also at odds with the once-popular notion that weak strikes are generated when a press is first turned on and when it’s shut off.

This phenomenon is beautifully illustrated by a Washington quarter dollar struck three times by the same die pair.

The first strike was normal while the second was 40 percent off-center and exceedingly weak. The third strike was 75 percent off center and forcefully delivered. This example also illustrates the self-correcting nature of some malfunctions responsible for weak strikes.