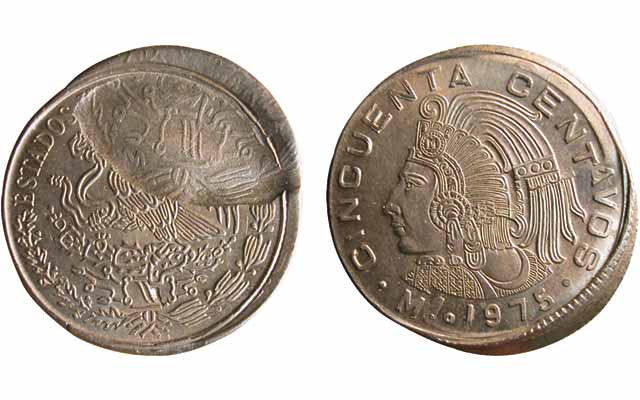 This double-struck 1975 50-centavo coin of Mexico features a partial counterbrockage on the first strike that was untouched by the second strike. 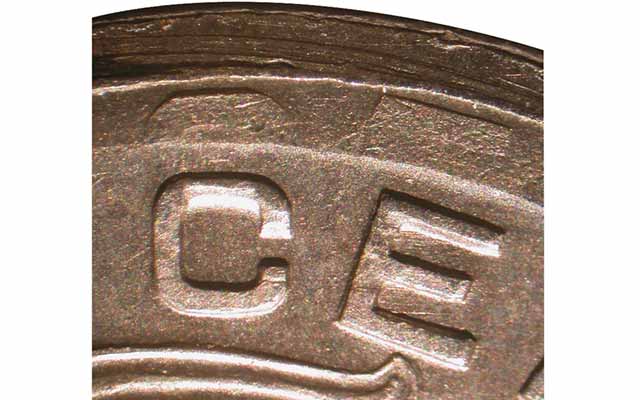 Weakly-struck design elements from the first strike, like the CE of CENTAVOS, lie just beyond well-struck counterparts from the second strike on the 1975 coin. 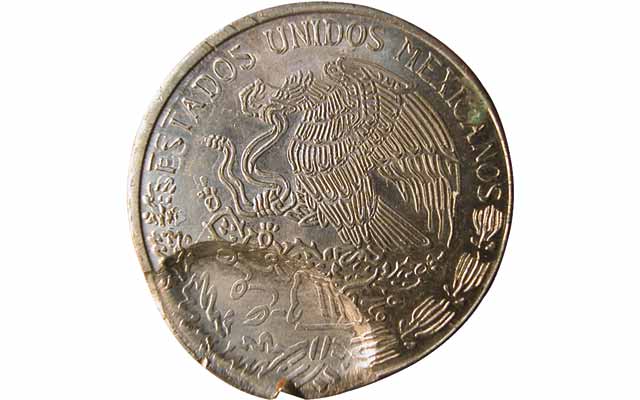 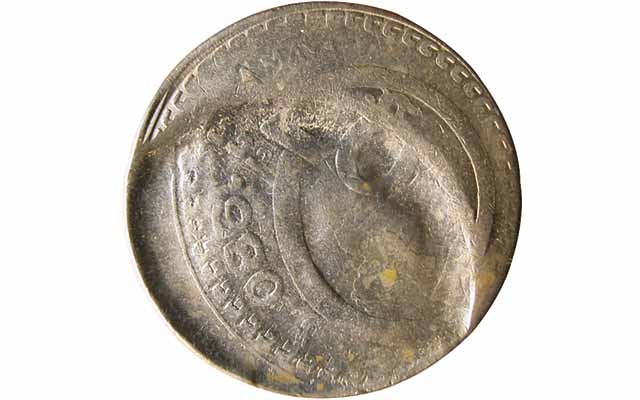 The reverse face of this 1980 Mexico 20-peso coin features a 75 percent partial counterbrockage.

The following is the Collectors' Clearinghouse column from the July 27 issue of Coin World:

It’s long been recognized that areas of a coin thinned by a strike may show strong persistence of first-strike elements in the aftermath of a second strike. This is because the region of reduced thickness may fall close to, or beneath, the minimum die clearance of the press.

This principle is beautifully embodied in the illustrated 1975 50-centavo coin of Mexico. When I first saw it in an online auction, I thought it was a centered double strike with slight movement between strikes and with a 40 percent indent on the second strike. Such errors feature flattened, expanded first-strike elements in the floor of the indent. A double-struck indented 1982 1-peso coin of Mexico demonstrates this effect.

But closer study of the photos showed my first impression was wrong. The indentation covers the upper half of the eagle, which dominates the obverse design. But the floor of the depression shows the lower half of the eagle in relief. As with most Mexican coins, the obverse die functioned as the hammer die in both of these coins.

I then surmised that this was a partial counterbrockage on the second strike — a very rare error.

The internal margin of the counterbrockage lines up with a disruption in the die-struck reverse design, with duplicated design elements appearing on either side of the discontinuity. This led me to believe that I was also looking at an “invisible strike.” It looked as if areas lying outside the partial counterbrockage on both faces had escaped the second strike because the minimum die clearance had increased beyond the thickness of the coin.

The problem with this diagnosis is that there weren’t any first-strike design elements beneath the counterbrockage. Some of the original design should have persisted, especially given the sharply defined feathers of the stylized eagle and the fact that the coin was partly confined by the collar. The collar limits expansion of the coin metal and thereby facilitates preservation of first-strike details.

The confusion cleared up once the coin arrived. As anticipated, it proved to be a centered double strike, with slight movement between strikes. But the partial counterbrockage was produced during the first strike, and there was no invisible strike.

After the first strike, the coin would have looked like the illustrated 1980 20-peso piece. This coin features a 75 percent partial counterbrockage of the reverse design on the reverse face. In this example, the reverse face was struck by the hammer die.

Returning to the 50-centavo coin, it’s clear that in the aftermath of the first strike, all areas lying beyond the counterbrockage were weakly-struck on both faces. For example, on the obverse face we can see the faint tops of the letters CE (from CENTAVOS) sitting just above the sharply-struck versions generated by the second strike. The only strong die-struck elements generated by the first strike were those lying directly opposite the counterbrockage, where the double thickness boosted the effective striking pressure. These elements include the date, the M Mint mark, the letters AVOS, and the neck and terminal plumes of the Mayan king.

The second strike was die-struck on both faces. However, the area of the coin thinned by the partial counterbrockage happened to be thinner than the minimal die clearance. The clearance was nevertheless within normal limits, since the area outside the counterbrockage was well-struck on both faces. It also appears that minimum die clearance decreased slightly during the second strike, as the die-struck design on the thicker portion of the coin is much stronger than in the first strike.