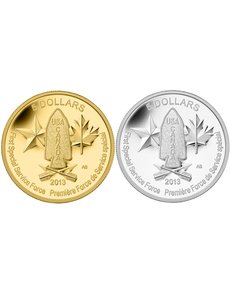 In the midst of the Second World War, Canada and the United States created an elite combat unit that struck fear in its opponents by silently striking at their front lines, swiftly dislodging them from terrain considered impassable, and fighting with the ferocity of a force several times its size. The FSSF (First Special Service Force), also known as the “Devil’s Brigade,” is now honoured on a new set of pure gold and silver collector coins from the Royal Canadian Mint.

Uniting a force of 2,100 men, the formation FSSF was the first and only instance where soldiers from Canada and the U.S. were seamlessly combined in this manner; training equipment, uniform and all.  Their first deployment was to the Aleutian Islands of Alaska in August 1943, and by November, the FSSF was fighting its way north through the mountains of Italy, performing such death-defying acts as scaling up 300 ft. cliffs at night to seize the enemy-held summit of Monte la Difensa.  Other missions included the defense of the Anzio beachhead where the men fought for 90 days conducting deadly night raids that soon inspired the nickname “Black Devils.”

Although the unit was only operational for two years, it demonstrated the power of uniting national forces against a common foe with a level of skill, versatility and spirit that would influence future elite forces like the US Army Special Forces and Canadian Special Operations Regiment in decades to follow.

The new collector coin honouring this elite unit highlights the two nations’ collaboration with a stylized star and maple leaf, layered with the FSSF shoulder patch that united them in joint missions.  Every soldier of the FSSF wore this symbol on his left sleeve.  The reverse also features the names of both nations, while its arrowhead shape can be interpreted to symbolize the warrior spirit of the FSSF.