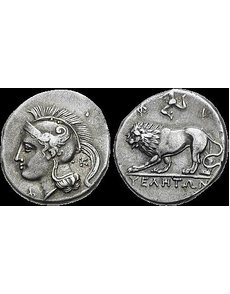 The prowling lion on this Velia didrachm of circa 300 to 280 B.C. is less animated than those of earlier times. Now, the nymph head is replaced by the goddess Athena. 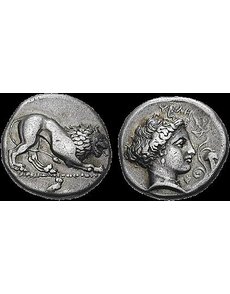 The lion on this early didrachm of Velia, dating from about 400 to 340 B.C. is particularly fierce, with a strongly arched back. The obverse portrays a nymph. 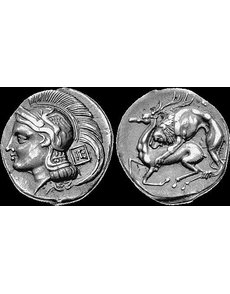 A stag falls victim to a lion on the reverse of this didrachm of Velia struck in about 280 B.C. The obverse shows the head of Athena, whose helmet is decorated with a griffin. 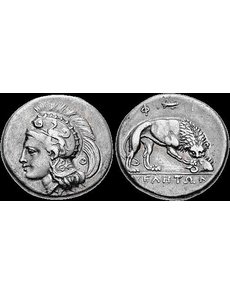 A lion gnaws on a ram’s head on this didrachm of Velia, struck circa 300 to 280 B.C. Above the lion are a grasshopper symbol and the letter phi, representing the mint officer Philistion.

Some of the most appealing designs on coins of southern Italy occur on silver didrachms of Velia, a Greek colony on the southwestern coast of Italy.

Most of these didrachms show on their obverse the helmeted head of Athena, and on their reverse a lion in various poses. Several major variants of these designs exist, making these didrachms a challenging topic for any collector.

Velia (Hyele in Greek) was founded in about 535 B.C. by Greek refugees from Phocaea, a Greek city on the western coast of modern Turkey. About a decade earlier they had left their hometown to escape the threat of Persian rule. They sailed westward across the Mediterranean, initially settling on the island of Corsica before moving on to the Italian peninsula.

They founded their city on the western coast in a region called Lucania, about 65 miles south of Naples. Its major geographical feature was a promontory on the coast of the Tyrrhenian Sea on which the original settlement and acropolis were built. Those same refugees later founded another colony, Massalia, modern Marseilles, France.

The earliest coins of Velia, struck from about 535 to 465 B.C., are silver drachms that show on their obverse the forepart of a lion that tears at a stag’s leg. The reverse is a simple incuse punch. The style, fabric and design of these drachms are all derived from the Greek East, and undoubtedly are a cultural import of the Phocaean colonists.

The lion became a heraldic badge of Velia — at least where coinage is concerned. It was a powerful and familiar image in the Near East and the Aegean world, and in religious terms it might have symbolized the Asian Diana.

On the didrachms of Velia, which succeeded the drachm as the main silver coinage of the city, the lion remained the principal design element.

The earliest Velian didrachms, issued from about 465 to 440 B.C., showed a crouching lion and the head of a nymph. Since the lion had been the obverse design on the earliest coinages it became the obverse type for the first didrachms. However, part way through that initial issue of didrachms the lion became the reverse design, and it remained so thereafter.

In about 440 or 435 B.C. the nymph’s head was replaced with the helmeted head of the goddess Athena. Thereafter, Athena was the unchanging obverse type of Velian didrachms until about 280 or 275 B.C., after which Velia forged an alliance with Rome and no longer produced its own silver coinage.

Though the nymph and Athena heads on these coins are beautiful, the greatest charm of Velian didrachms is the lion. On the earliest didrachms, with the nymph head, the lion is shown crouching in an aggressive stance, with its back strongly arched and its mouth open, as if defending its territory.

The first of the Athena-head didrachms show on the reverse a lion bringing down a stag. This energetic composition had appeared on other ancient coins, notably from the Greek East. In essence, it was an expansion of Velia’s first coin design, which showed the forepart of a lion tearing at a stag’s leg. The early type, with the lion tearing the stag, was used for nearly a century in three separate issues.

In about 400 B.C. the “crouching” lion was reintroduced, though this time it appears more to be prowling or walking — sometimes rather casually. Alongside that type, the lion-and-stag type was also struck, with those two design types being the only designs used for didrachms at Velia for about the next 60 years.

In the 340s or 330s B.C., the familiar lion designs at Velia were supplemented with three elegant new variants that rounded out the major reverse types of Velian didrachms. One shows a lion standing with a raised paw, another a lion tearing at its prey, and the third shows a lion pawing its prey with its head reverted.

The first design portrays the lion standing at the ready, as if confronting a rival; one of his front paws is planted firmly on the ground and the other is raised in a threatening manner.

The other two designs are closely related to each other in that they show a lion attending to a meal. In one case the head of the lion is nearly facing the viewer as it tears at an animal part. Though the animal part usually is somewhat generic, in at least one case it clearly is a ram’s head.

The related type captures the lion in a moment of peak activity: it appears to have been eating while startled by something behind. The artist captures the cat just as it has raised its head to look back, making this one of the most appealing of all compositions on Velian coinage.

Two rare variants of the lion types struck sometime around 300 B.C. deserve special mention. One shows the lion in the usual “devouring” position, yet instead of a meal it holds in its jaw the blade of a sword or a spear-tip, and three waves crest below. The meaning of this type is not certainly known, though it likely is a political commentary, and may refer to Taras, another city-state in Magna Graecia (Great Greece).

The other major variant seems to be equally political. It shows a prowling lion with a palm tree in the background. The composition is borrowed from silver tetradrachms struck by the Carthaginians for their military campaigns against Greeks in Sicily.

Most scholars date the Carthaginian prototype to circa 320 to 310 B.C. There is good reason to believe this Velian didrachm relates to the exploits of Agathocles, the king of Syracuse and the most powerful Greek in Sicily. This is likely confirmed by the use of the trisceles (three legs displayed in a triangular format, which represented Sicily in general and King Agathocles in particular) as a symbol on contemporary Velia didrachms.

The standard reference for this series is The Silver Coinage of Velia by Roderick Williams, a die study published in 1992. Williams’ conclusions have survived scrutiny, with only slight modifications in later works, notably in N.K. Rutter’s Historia Numorum: Italy. ¦