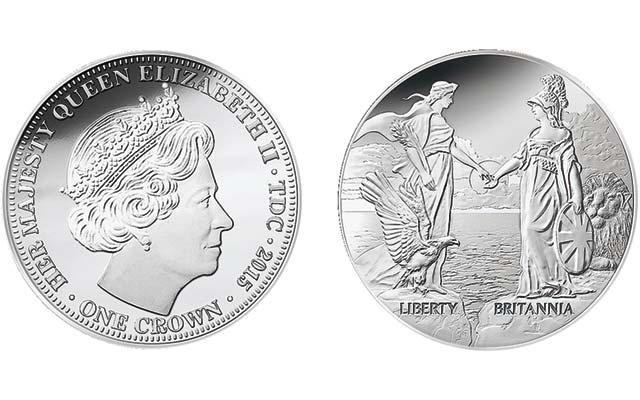 Britannia and Liberty appear together for the first time on a coin, on the reverse of a Proof crown struck in the name of Tristan da Cunha. The design was created by Joel Iskowitz for the Bradford Exchange Mint. 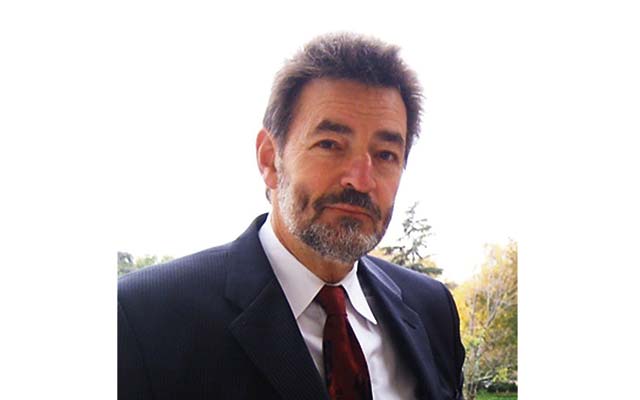 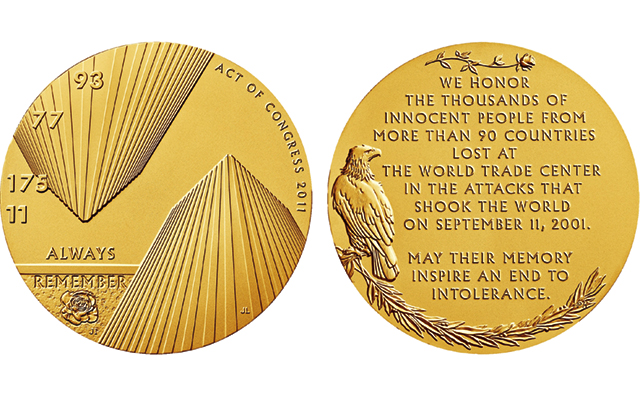 One of Iskowitz’s most recent designs for the U.S. Mint was the obverse of the 2014 Fallen Heroes medal for the World Trade Center. 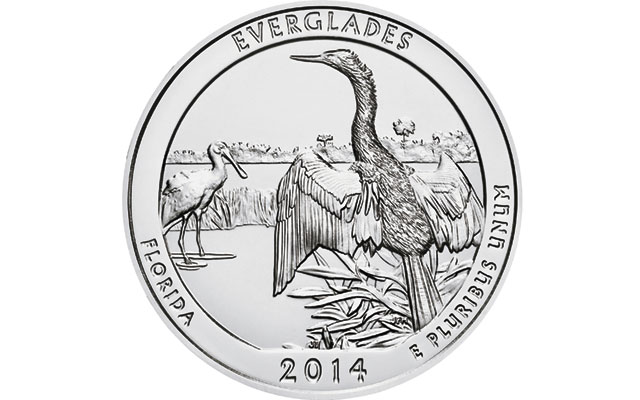 When artist Joel Iskowitz prepares designs, the things to which he pays the most attention might be those that won’t be shown.

An example of that philosophy can be demonstrated with a Proof 2015 .999 fine silver crown in the name of the British Overseas Territory of Tristan da Cunha.

The coin, which is being issued through Bradford Exchange Mint, is the first coin to show Britannia and America’s Liberty together, according to Bradford officials.

The coin is meant to show the special friendship between two countries, the figures extending hands toward each other against a rising sun, while an American Eagle and British Lion look on.

Iskowitz made a significant change to the figure representing Britain, to present the pairing of icons in the right light.

“Britannia is usually seen with a trident, from when the British Empire ruled the seas. But it’s a weapon, [so] I purposely didn’t include the trident. It’s not like I forgot,” Iskowitz said. Of the two figures his design depicts, he said, “They’re certainly reaching out across an ocean expanse, a cultural expanse, in friendship.”

“There’s a lot that goes into the iconography and the symbols,” Iskowitz said. That explains the one to two months of research Iskowitz said he performs before even putting pencil to paper.

“To try to make these designs resonant and meaningful, we do our due diligence,” Iskowitz said.

“The real work begins with research, especially with subjects so epic and advanced and deep as this. ... [We have] to become conversant in the material, to learn the P’s and Q’s and facts of a given historical subject.”

During the discussions about this project, Iskowitz recalled seeing World War I recruitment posters with Britannia and Liberty together, and wanted to see them paired in metallic form.

It turns out that the idea was a first for coinage.

“We weren’t even sure if it would be a precedent-[setting] thing ... this is a first as far as anyone knows,” he said. “You don’t have to go very far [in history] to see what kind of special relationship we’ve had, especially during World War I and World War II. Plus our country is born from Anglican ancestry.”

In the coin community, Iskowitz is probably best known as a designer of U.S. coins and medals. He has worked with the United States Mint as a participant in the Mint’s Artistic Infusion Program to create dozens of designs.

Iskowitz said though the technology remains the same, whether working with the U.S. Mint or a private entity, the design review process is much more involved when making U.S. coinage designs.

Different editorial review processes are involved — fewer people are involved in private sector creations, as compared with review by the Commission of Fine Arts and Citizens Coinage Advisory Committee, the legislatively mandated groups that have a say in coinage design.

“It’s stirring to me — I always get chills when I say this,” Iskowitz said, “but this goes back to George Washington when he made sure that our coinage could be reflective of the people.”

“There are a lot of eyes and attention and a much more elaborate process after the art is handed over.”

Once Iskowitz completes his design, whether for private commission or for the U.S. Mint, it is up to a sculptor to interpret it as he or she can.

“I’m just a guy with a pencil and a paintbrush who doodles,” Iskowitz said. “The U.S. Mint has an undersung group of engravers and sculptors of tremendous talent. And there are a number of them in the private sector, too.”

The image of Liberty that Iskowitz created for the Tristan da Cunha project is a different version than seen elsewhere, he said.

“It’s neither the lady in New York Harbor or the Liberty on bank notes. She’s certainly a different version — hopefully she’s mine. But I have to know what [Adolph] Weinman and [Augustus] Saint-Gaudens and Hermon MacNeil did before me. You can’t break from tradition if you don’t know it.”

The reverse design by Iskowitz is paired with an obverse effigy of Queen Elizabeth II “created by a design team that we work with” and that was approved by Buckingham Palace, according to a Bradford spokesperson.

The Liberty and Britannia coins will be struck in the West Midlands, United Kingdom, suggesting they may be struck at the Birmingham Mint.

The 1-ounce coin measures 38.6 millimeters in diameter and has a mintage limit of 4,999 pieces.

The crown coin comes with a deluxe wooden display box and costs $199 through a special page on Bradford’s website.

Iskowitz said the latest project with Bradford is among many already issued or on their way, including a modern interpretation of the classic Indian Head 5-cent coin and designs related to President Abraham Lincoln’s life and legacy.

But most Coin World readers will encounter his designs regularly, through their pocket change, thanks to his participation as an Artistic Infusion Program artist.

In that program, Iskowitz competes to have coinage and medal designs chosen to be struck by the U.S. Mint as it meets its legislative mandates for various programs.

The most recent U.S. circulating coin design credited to Iskowitz is the 2014 (Florida) Everglades National Park quarter dollar in the America the Beautiful program. In late 2015, Iskowitz’s design for the Bombay Hook National Wildlife Refuge quarter dollar for Delaware is due to enter circulation.

His other recent works include the obverse of the 2015 U.S. Marshals Service commemorative half dollar; the Proof 2014-W American Eagle platinum $100 coin, reflective of the fifth principle in the Preamble, “To Promote the General Welfare”; and the obverse of the 2014 Fallen Heroes medal for the World Trade Center.

More of Iskowitz’s art can be seen online at his website.