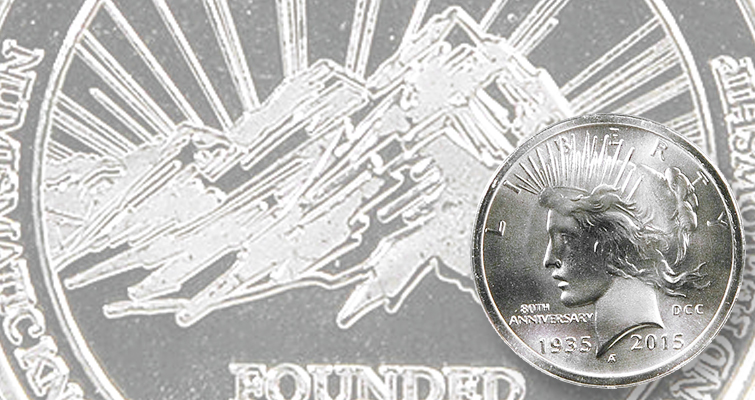 The Moonlight Mint in Colorado struck commemorative medals to mark the 1935 founding of the Denver Coin Club. 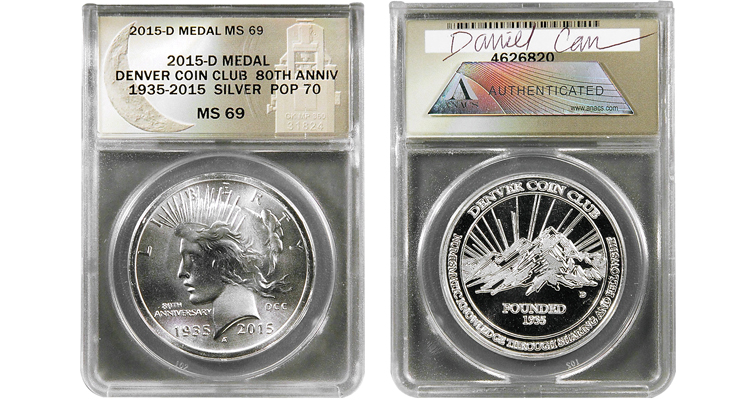 The Denver Coin Club celebrated its 80th anniversary in 2015 with the production of commemorative medals. Shown is one of the 39-millimeter, 1-ounce .999 fine silver, satin, prooflike medals graded and encapsulated by ANACS.

The obverse design for the medals features sculptor Anthony de Francisci’s portrait of Liberty which appeared on the obverse of the Peace dollar from 1921 through 1935, the latter being the year the Denver Coin Club was founded.

Also appearing on the obverse are 80TH / ANNIVERSARY, DCC for Denver Coin Club, the dates 1935 and 2015, and the stylized designer’s initials of the original sculptor, AF, although below and to the left of the truncation of the bust.

On the coin, the designer’s initials are down and to the right side of the truncation.

The reverse features the Rocky Mountains with the sun’s rays behind, the letter D as a mint mark representing Denver, and FOUNDED / 1935 below. Inscribed around is DENVER COIN CLUB and NUMISMATIC KNOWLEDGE THROUGH SHARING AND FELLOWSHIP.

Carr said the reverse is a DCC logo die that has been used for different DCC medals over the years.

Carr produced 32 medals in copper with a 39-millimeter diameter, and 72 medals composed from 1 troy ounce .999 fine silver each, and each measuring 39 millimeters in diameter.

All of the copper and silver strikes produced on blank planchets have medal-turn die orientation.

According to Carr, most of the copper and silver medals were graded and encapsulated by ANACS.

Carr said he did not record what the host piece was for each piece struck, but the undertype is identifiable because evidence of the underlying design remains visible.

“The over-struck pieces were generally broad-struck [without a retaining collar] and so they show the original edge style of the item being over-struck,” according to Carr.

The overstrikes come with either medal-turn or coin-turn die orientation, to match the orientation of the item being struck over, Carr said.

In medal turn, on the struck coin, the tops of the designs of both sides are back-to-back.

In coin turn, on the struck coin, the bottom of the reverse design is back-to-back with the top of the obverse design.

Carr said all of the copper and silver satin, prooflike medals have been distributed.