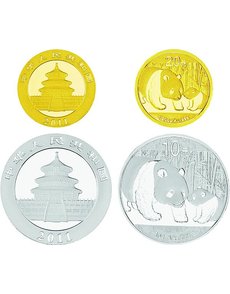 The People’s Bank of China announced increased mintages for China’s Panda .999 fine gold and .999 fine silver bullion coins for 2012. The increase will affect all six bullion coins, including the fractional gold coins (represented by the 20th-ounce 20-yuan coin seen here), and the 1-ounce sizes, illustrated here with the silver 10-yuan coin.

Coins loaned for photography by PandaAmerica.com.

Pandas have notoriously sensitive populations, but the coins depicting them are proliferating at least: amid soaring demand the People’s Bank of China has announced higher mintages for 2012 Panda bullion coins.

The 2012 mintages for the coins will in some cases double or triple compared to 2011 mintages, according to the June 20 announcement.

The decision to increase mintages was reported by state news agency Xinhua and confirmed by a spokesperson for China Gold Coin Corp., the distributor of the coins in China. PandaAmerica, the California-based distributor for the United States, also confirmed the increased mintages for 2012, the second consecutive year China has raised mintage figures for the Panda precious metal bullion coins.

“Chinese investors have rushed to buy precious metals this year to hedge against rising inflation,” according to the Xinhua report.

In the first quarter of 2011, China became the world’s largest market for gold coins and bars for investment, according to a May 19 report from the World Gold Council, a trade group.

China currently issues 10 different Panda coins annually. The six pieces for which mintage increases have been announced are issued as bullion pieces. Four additional coins, 5-ounce and kilogram sizes of both silver and gold coins, are issued in Proof versions and were not discussed in the recent announcement; their mintages will not be revealed until later this year.

That doesn’t mean they will immune to increases; mintages for eight of the 10 Panda coins (bullion and Proof combined) rose from 2010 to 2011, in some cases dramatically.

Mintages for some of the large versions were also raised: the kilogram gold coin went from a mintage of 200 pieces in 2010 to a 300-coin mintage maximum this year.

The accompanying table lists full details of the rising mintage limits from 2010 through the announced limits for 2012.

The obverse of each Panda coin shows the Hall of Prayer for Good Harvests (the Temple of Heaven). The reverse design has changed every year since the Panda made its debut, except for 2002, and shows a different design of a panda or pandas.

China’s Panda coins are minted at the Shenzhen Guobao Mint, Shenyang Mint and Shanghai Mint, and are generally not identified with a Mint mark. ¦