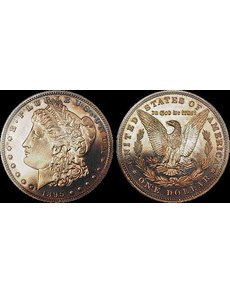 What coin comes to mind when you see the phrase “The Ultimate Silver Trophy Coin”?

Heritage’s recent Florida United Numismatists auction used the phrase when describing the Proof 1895 Morgan dollar, calling the issue “a trophy that can actually be won by collectors who are not megawealthy.”

Philadelphia Mint 1895 Morgan dollars are available only in Proof format as no circulation strikes have been confirmed to exist despite a reported mintage of 12,000 pieces.

At 880, the mintage for the Proof 1895 Morgan dollar is typical for the era, but the issue has atypically high demand resulting from the unavailability of circulation strike examples. These 1895 dollars are collected with the “normal” series and while most collectors are only looking for a single Proof Morgan dollar for type purposes, the Proof 1895 dollar appeals to date and Mint mark collectors as well.

Looking at grading service population reports for the issue can be deceiving as more Proof 1895 dollars are recorded in population reports than any other Proof Morgan dollar. The number of issues in each grade has been inflated by resubmissions, or people breaking coins out of encapsulations and resubmitting the same coin with the hope of getting a higher grade (and then not turning in the prior certification label so the grading service can remove the prior submission from the population).

At a base level, a collector should expect to spend at least $30,000 for an impaired Proof that’s seen some circulation. For example, in a September 2012 David Lawrence Rare Coins auction, an 1895 Morgan dollar graded Proof 50 brought $35,000.

Examples in mid-range Proof grades are more commonly available and in September 2012, Heritage sold a Proof 63 piece for $44,065. For comparison, an 1896 dollar with a mintage of 762, graded Proof 63 by Professional Coin Grading Service, realized $2,553 in a February 2012 eBay auction.

Another example also graded Proof 65 Cameo by PCGS realized $76,375 at an Oct. 19, 2012, Heritage auction. Such differences in price at auction for seemingly comparable pieces shows the wide range of prices toward the top of the market, where subtle differences in quality can mean huge price jumps.

One of the most expensive examples in recent memory to cross the auction block was graded Proof 66 Deep Cameo and brought $126,500 at Heritage’s 2012 FUN auction.

Despite their scarcity, these coins trade relatively frequently and truly exceptional examples are rare. As long as the Morgan dollar retains its status as one of the most widely coveted classic coins, don’t expect prices to let up on this key issue anytime in the near future. ¦