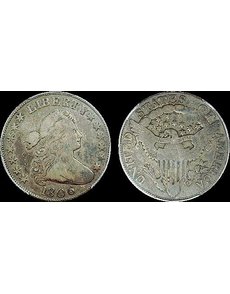 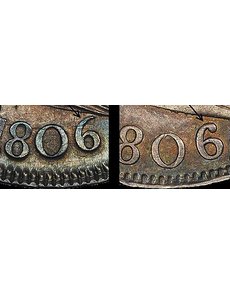 Above left is a close-up image of an 1806 Draped Bust half dollar bearing the date with Pointed 6; the image seen above right depicts the much different Knobbed 6 style used in the date on some of the coins. 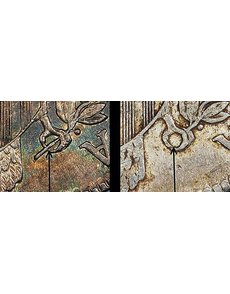 A rare 1806 Draped Bust, Knobbed 6, No Stem half dollar kept by its current owner for more than 60 years has been reported.

The piece is now only the seventh example known for the Overton 108 variety (Early Half Dollar Varieties: 1794-1836 by Al C. Overton and Donald Parsley).

The variety was struck by an obverse die with the 6 in the date having a ball at the top. A second style of 6 (the Pointed 6) is also found on 1806 Draped Bust half dollars; this style of 6 has a point at the top.

On the reverse, the stem from the olive branch is absent from going through the eagle’s left claw, to viewer’s right.

The O-108 die marriage represents the only 1806 Knobbed 6 obverse paired with the No Stem Through Claw reverse.

Rich Uhrich from Rich Uhrich Rare U.S. Coins Inc. in Hershey, Pa., said the central Pennsylvania owner of the seventh known 1806 O-108 half dollar brought the coin to him sometime in August 2012 seeking verification and advice on what to do with the coin.

After discussion, the coin was authenticated by Professional Coin Grading Service, which
graded the coin as Fine 12.

Uhrich said the coin’s owner, who is in her 70s, told him she acquired the coin when, at the age of 12, she was allowed by her father to pull a handful of coins out of a jar of collectible coins he had.

Uhrich said the woman told him she has held on to the 1806 Draped Bust half dollar since then and that she knew she had a special coin.

He said the woman told him she tried to keep track of the coin’s value by continually checking the annual editions of the “Red Book” (A Guide Book of United States Coins).

Uhrich was accepting sealed bids for the sale of the half dollar, which was scheduled to close Jan. 11 during the Florida United Numismatists convention in Orlando. The coin has an undisclosed reserve.

The O-108 variety was first attributed in 1951 by numismatic researcher Walter Breen.

The die marriages are grouped by major subtype — Pointed 6 or Knobbed 6. The Knobbed 6 obverse has two subdivisions, Large Stars or Small Stars. O-108 is in the Small Stars category.

On a rarity scale of 1 through 8, the O-108 variety is listed in the Overton-Parsley reference as R-7 (extremely rare, four to 12 known).

The No Stem Through Claw reverse die used to produce the O-108 die marriage apparently broke early in its use, since two of the now seven known 1806 O-108 half dollars exhibit evidence of a major die break. The seventh known piece is not one of those two.

After the die broke, the broken piece of the die fell out, allowing subsequent coins struck from the broken die to have the planchet metal flow into the void during striking, creating a cud error.

On broken die examples, the flattened and raised area appears along the reverse of the rim from midway through the U in UNITED across the tops of the letters and ending midway between the E and D.

In a July 2008 Heritage auction in Baltimore, a piece certified by Numismatic Conservation Services as Fine 12, with heavy thin scratches, sold for $25,300. ¦