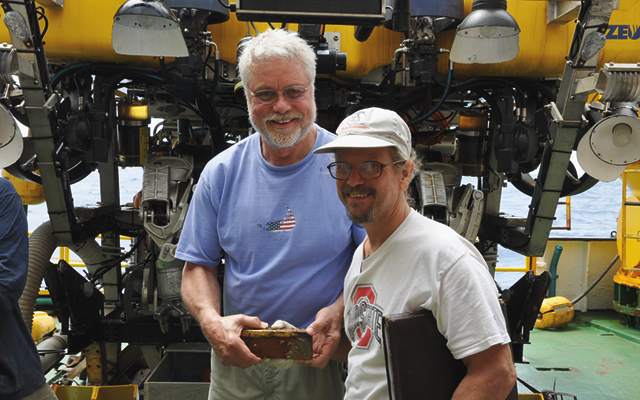 Craig Mullen, Recovery Limited Partnership’s director of operations (the firm helping with the salvage), left, and RLP’s chief scientist/historian, Robert Evans, are shown with one of the gold bars recovered on April 15 from the SS Central America.

Ever since mankind began crossing waterways, deadly storms, rocky shoals and collisions between vessels have killed countless men, women and children. Water does not discriminate. It takes human life as easily as it takes ships and their cargos. The bottoms of the world’s rivers, lakes, seas, and oceans are littered with wrecks.

Wrecks carry within their holds the detritus of human industry, sometimes including precious metal — gold and silver coins, ingots and ore.

While uncounted ships carrying coins and bullion have been lost, and some recovered, two ships that plied the Atlantic Ocean stand out for the richness of their lost (then found) treasures — the SS Central America, and the SS Republic.

Years after the last California Gold Rush coins and ingots were recovered by the original salvors SS Central America, the saga of the gold treasure lost in the 1857 shipwreck continues. A new salvage company has found additional treasure at the famous wreck site. On April 15, 2014, Odyssey Marine Explorations stopped at the shipwreck site for what had been intended as a brief inspection dive before the firm’s vessel continued elsewhere. The two-hour exploration unexpectedly resulted in more than a $1 million in gold ingots and coins being found and recovered.

Eventually, the SS Central America ceased to be a name familiar to the average American. Insurance companies paid off the losses in gold, closing their books on the ship. The shipwreck and treasure remained lost to memory until 1986, when a salvage ship operated by the Ohio-based Columbus-America Discovery Group located it in the Atlantic Ocean.

Columbus-America Discovery Group was formed by Tommy Thompson, a marine engineer who had long dreamed of using his skills to find lost treasure. After long years of research and the assemblage of a team of historians (including Robert Evans, who today advises Odyssey Marine on the new salvage efforts), marine engineers and other experts, an expedition went out in search of the wreck. After months of searching, the wreck site was found, along with a fortune in gold ingots and coins strewn across the ocean floor.