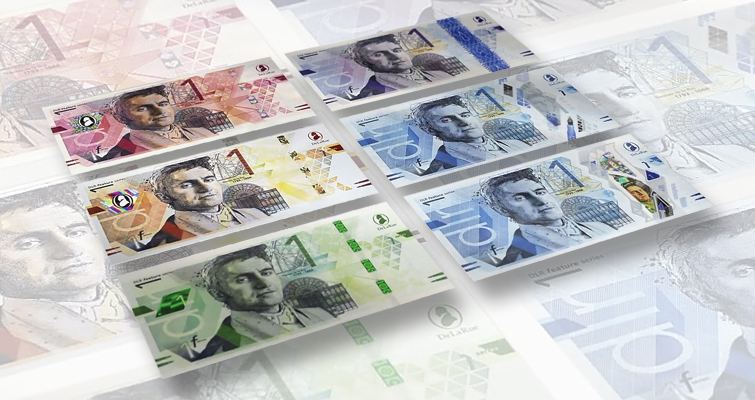 De La Rue’s new house notes demonstrate several of the bank note printer’s security features, including some that change when the note is tilted.

Some of the more fascinating and unusual paper money collectibles are “house notes,” which are essentially advertising samples produced by bank note printers to demonstrate their security printing techniques.

Bank note printer De La Rue debuted a series of such notes on Feb. 16 called the 1st Edition Feature Series, that the firm says it designed to show how its security features work together throughout a series of notes, and how different elements can be applied to a standard series of notes.

As with a legal tender note series, De La Rue wanted a central theme to represent its view of itself, in this case, qualities of creativity, progressiveness and expertise. So it selected an individual of great significance, founder Thomas De La Rue (1793 to 1866), calling him “a ground-breaker who cared deeply about what he did,” with his philosophy still resonating within the company. In addition to his portrait, the designs incorporate notable events and parts of his life in the designs of the notes.

The Feature Series consists of two polymer and four paper notes, to show that the printer is able to support production of a complete series of modern bank notes. The house notes demonstrate how the security features complement one another throughout a series.

For example, the “Pureimage” house note has a holographic thread and patch, and images that appear as two colors when exposed to ultraviolet light. A second note replaces the holographic thread with one called “Kinetic Starchrome,” a thread with two different elements. When tilted, a holographic rainbow runs up the thread as another element changes color. The four other notes display other combination of stripes, windows, and various printing techniques. These can differ based on denomination, usage, counterfeit risk, and environment, among other factors.

Packs of house notes are available from De La Rue for examination, but you need to represent a note-issuing authority in order to get a pack. 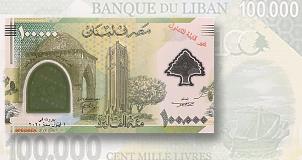 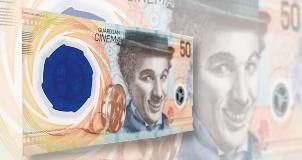 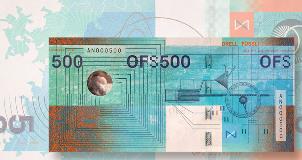