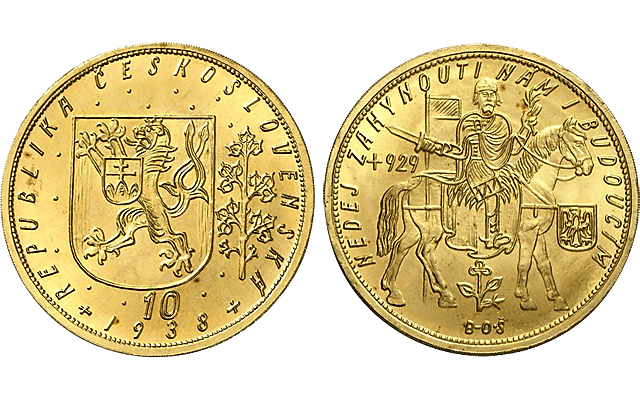 Results shared here are hammer prices and do not include the buyer’s fee or value-added tax.

All are listed in the 2013 edition of the Standard Catalog of World Coins by Chester Krause and Clifford Mishler (edited by George Cuhaj, with values by Tom Michael).

A representative of the firm said: “It staggers the imagination to consider what such a set might have obtained if it had consisted of Russian or Chinese coins. Modern coins from Czechoslovakia rising to such a price range clearly indicate how intense the interest in numismatics has become in this country of the former Eastern bloc.”

The market for rare gold of Czechoslovakia converged in Germany, as another 1938 gold 5-ducat coin led bidding in Fritz Rudolph Künker’s auction No. 245 the same week. That auction offered an example in “About Mint State” that realized a hammer price of €110,000 (about $152,623 U.S.).

The set was one of thousands of offerings over three days.

Auction No. 219 offered “high quality ancient coins,” with auction No. 220 featuring ancient coins and lots. The final auction, No. 221, focused on coins of medieval and modern times. A full list of prices realized for the Gorny & Mosch auctions can be viewed at the firm’s website, www.gmcoinart.de/online_katalog.