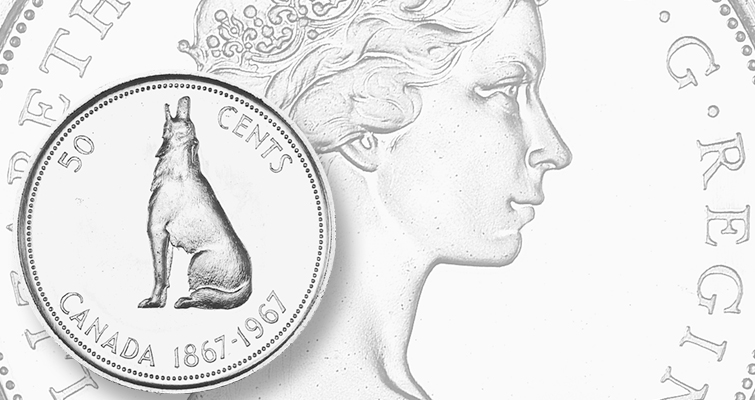 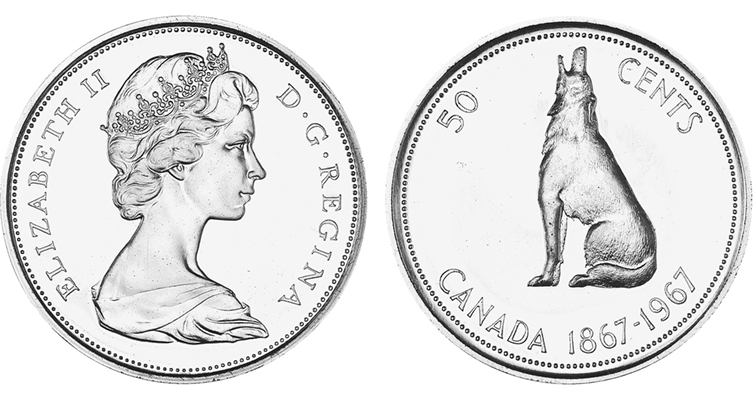 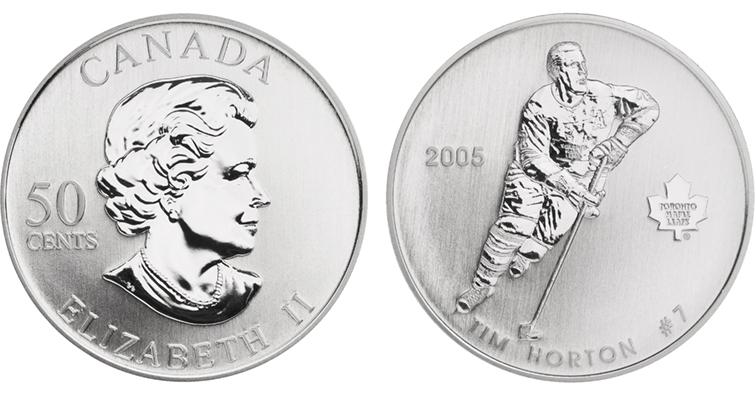 Tim Horton may be better known today for the coffee-and-sandwich shop bearing his name, but he was actually a National Hockey League star for the Montreal Canadiens. A 2005 silver 50-cent celebrates his sporting legacy. 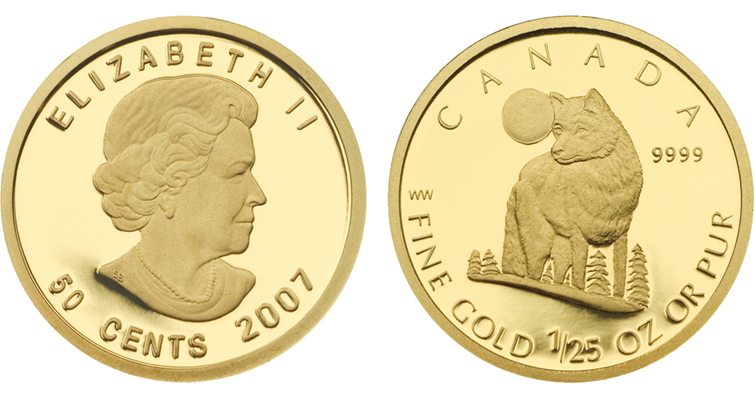 The star of Canada’s series of small (25th-ounce) gold coins is the 2007 Eastern Timber Wolf coin, which sells for four times its metal value.

Editor's note: This is the first part in a series about collecting 50-cent coins (and their equivalents) by Jeff Starck that appears in the January 2016 monthly issue of Coin World.

One of the long-standing, historically active areas of world coin collecting is the pursuit of world crowns.

Crown coins are those coins that are roughly equivalent in size to the British crown coin that was issued (sporadically) from 1551 to 1937.

But we’re here to give some love to the 50-cent coin, the crown coin’s smaller sibling. Dozens of nations have issued 50-cent coins or equivalents denominated in centavos, centimes, senitis and more.

The humble half dollars of the 20th and 21st centuries offer an array of beautiful and significant designs giving collectors a global  goal for a new collection.

To find the closest place to start, just look north of the United States, toward Canada.

The half dollar may seem like the quintessential American denomination, but like the dollar itself, its roots are in the Spanish colonial coinage that influenced much of the world.

When the British outpost now known as Canada began growing in the mid-1800s, its proximity to the United States of America explains why Canadians would prefer a decimal currency like that in use in the United States instead of the pounds, shillings and pence system of their motherland.

So, a 50-cent coin was a natural creation, facilitating cross-border trade.

The earliest Canadian 50-cent coins appeared in 1870, a few years after Confederation pulled together several of the colonies into one unified Canadian nation (others, like Newfoundland, would join later).

The denomination was long a repository of monarchs and flora, until a redesign in 1937 coincided with the ascension of George V to the throne. Since that time, the nation’s coat of arms has found an almost constant home on the half dollar.

The most iconic Canadian 50-cent coin is probably the 1967 Howling Wolf design that was part of a suite of circulation coin designs selected in a national contest to commemorate the Confederation Centennial.

The Howling Wolf coin also marks the end of Canadian silver coinage for the denomination (the .800 fine standard was replaced in 1968 with nickel).

Today the 50-cent coin is rarely, if ever, encountered in circulation in Canada (sound familiar, U.S. readers?). The Royal Canadian Mint has taken to selling special limited edition rolls of the coins in many years to attract the buyers who want to complete their set.

But the denomination also has a home in collector and precious metal coins.

Beginning in 1995, the RCM issued the Discovering Nature series of four-coin sets annually, continuing through 2000, using the denomination to showcase the nation’s waterfowl, birds of prey and other birds, ocean life, cats, and young mammals.

Since then, dozens of 50-cent coins have been issued, including those that highlight Canada’s flowers with gold plating, show Canadian butterflies in color, or honor the nation’s National Hockey League legends.

The name Tim Hortons might be known today as a coffee shop, but the shop carries an NHL great’s name; Horton was a player for the Toronto Maple Leafs, a storied franchise in NHL history.  Horton was one of four Maple Leaf players featured on the four 50-cent coins in 2005, joining Johnny Bower, Darryl Sittler, and Dave Keon.

If you’re looking for a golden component to a 50-cent coin collection, consider Canada’s annual 25th-ounce gold 50-cent coins that have been issued since 2004. The Moose coin kicked off the series and has been the second-strongest issue from the series in the aftermarket, but the Wolf coin from 2007 is the king. On the reverse, a lone Eastern timber wolf stands on a hill with a full moon visible. (The design was used originally for the short-lived half-ounce silver bullion coin program that the RCM launched in late 2005 and ended in mid-2006.)